Kenya Kwanza presidential contender William Samoei Ruto has blasted Azimio One Kenya alliance over an audio clip that alleges he trid to salp Uhuru ion 2017.The audio clip was played by ODM Director of elections Junet Mohammed On Sunday 3rd July during an Azimio rally in Ndhiwa constituency.In the video played to hundreds of Kenyans during the rally,Ruto is heard saying that he would hav slapped Uhuru in 2017 after he was distraught and given up on going for a rerun after their win in the elections was nullified.

President Uhuru Kenyatta and his deputy William Samoei Ruto are no longer bossom buddies.Uhuru Kenyatta is the national chairman for Azimio One Kenya alliance that supports Ruto's opponent Raila Odinga while Ruto is vying for the presidency thrrought the Kenya Kwanza alliance. 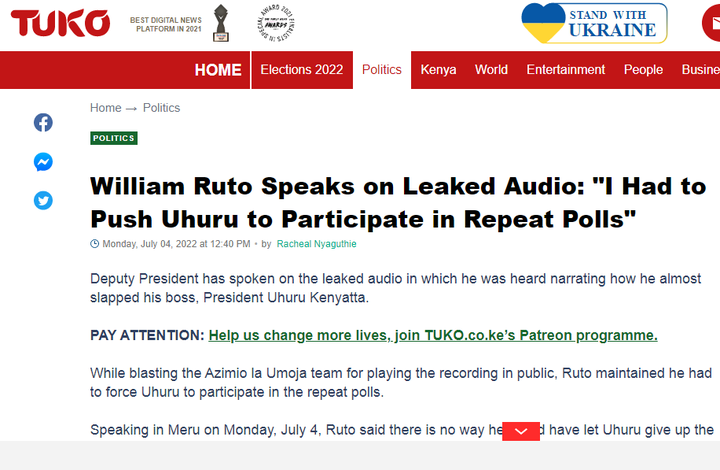 Kenyans React To Sabina Chege's Tweet After Posting This Photo

Sabina Chege Speaks After Presidential Results Were Delayed Past 4pm

"Where is Baba?" Raila Odinga Delays To Arrive at Bomas Of Kenya

PHOTOS: See How Dp Ruto Arrives In Bomas To Await For Presidential Results From The IEBC

JUST IN: Security Beefed Up Around Bomas Auditorium as Kalonzo Arrives [Photos]