By ShamuAshale (self media writer) | 4 months ago

Democratic Action Party of Kenya (DAP-K) is the newest political party in the country that has offered a challenge to parties that have been existence for more than two decades.

DAP-K was formed barely six months ago and is associated with Defence cabinet secretary Eugene Wamalwa with David Muchele an accountant by professional being its National Chairman.

The party has offered a lifeline to a number of seasoned politicians who feared being rigged out during various the nominations.

The duo were picked during DAP-K national delegates conference at Bomas of Kenya.

Since it was unveiled to the public, Wamalwa,Wamunyinyi, Eseli among other top officials have been crisscrossing the country selling its manifestos ahead of the general elections in August this year.

"DAP-K is the solution to many aspirants, the party has come at the right time and am asking many politicians to join this party so that we can grow it up to be something big in future," said Muchele.

He added, "We support Raila Odinga Presidential bid and his Azimio la Umoja movement, he is going to be our fifth President,".

"We will realize our destiny in politics through DAP-K, the new dawn in politics is here, this is where true democracy is in action, hence Democratic Action Party of Kenya," said Makokha.

Speaking at the County Headquarters at Sunrise Estate in Bungoma town, Makokha noted that they have since encountered a beehive of activities as politicians visit the office to register with DAP-K.

So far they are encouraging all politicians interested in vying for seats from MCAs to Governors to visit their office and enlist with them. 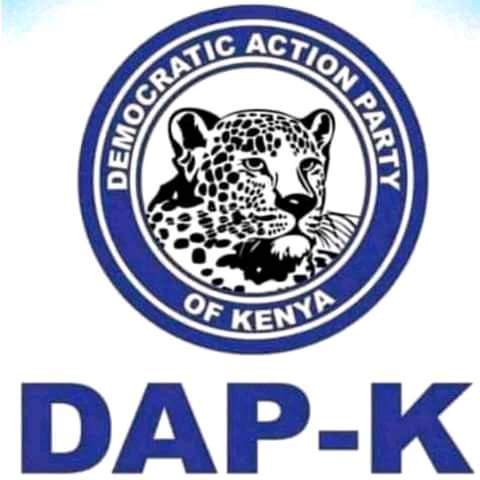 For an ordinary Member to join DAP-K he or she is supposed to pay as little as Sh20 only while for one to be a Life member of the party, he or she will pay the membership fee of Sh15,000.

For those contesting for various political seats, the nominations fee is as follows;

"Let all Aspirants visit our Bungoma branch office @Sunrise road Kanduyi for registration and party procedures, No cash should be given, all deposit should be made to Party account number en present the banking slip.