By Vision+Kenya (self media writer) | 13 days ago 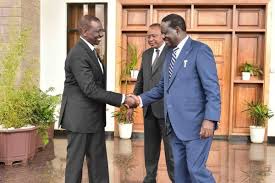 William Samoei Arap Ruto is the deputy president of Kenya with Uhuru Mwigai Kenyatta as the president. He is currently on the process of wooing Kenyans to rally behind him and his newly formed United Democratic Alliance party.

Ruto has been at the forefront in the run for presidency since 2017 something which made him close roads with the president, as days to the next general elections draw near, here are are the mistakes that Ruto made that will cost his presidency;

1. Falling out with president Uhuru Kenyatta and opposing the building bridges initiative.

The reason of the now evident rift between the two has not been put out clearly but at one public event during the launch of building bridges initiative at the Bomas of Kenya, the president blamed his deputy of being over ambitious through his early campaigns that were derailing the government projects.

Ruto however went ahead with his campaigns and then decided to be against the initiative, the bill was bringing equity in Kenya more especially the vote rich region of Mount Kenya, this makes his opponents and president uhuru's pointpeople from the region to have an easy ground of campaigning against him thus his chances of getting votes from the region and Kenya at large is good as being minimal.

Kenyans can as well remember the promises he made of building modern stadiums in each county in Kenya which is not the case currently, the promise of giving laptops to class one children in which some of us were to be beneficiaries but here we are today and we can testify that the promise was just an enticement to gain votes and finally the creation of one million better jobs yearly which is not the case but currently he claims that any job is fit. These ground alienates the deputy president from majority of voters now.

3. His stand for his allies to disband their parties and join the UDA

The Deputy president has stood on his ground to ask his allies to disband their parties and join one, this has made the likes of powerful Mount Kenya allies like Moses Kuria and Mwangi Kiunjuri stand their way, Ruto also claims not to enter into any other alliance and one can as well remember that it is alliances that win elections and not just an individual.