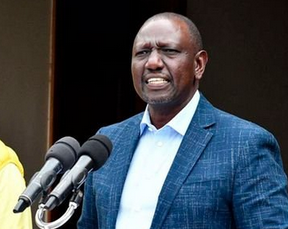 William Ruto, the duly elected President of Kenya, has started getting phone calls from leaders and head of states outside the country, hours after the chair of the Independent Electoral and Boundaries Commission Wafula Chebukati declared him as the winner of the August 9 presidential elections.

Chebukati on Monday announced that Ruto has won the top seat with 7.1million votes, against his main rival, the Azimio la Umoja One Kenya Alliance presidential candidate Raila Odinga who managed to get 6.9million votes.

On Tuesday August 16th, the president of the Federal Republic of Somalia Hassan Sheikh Mohamud through his Twitter account, revealed that he had spoken with Ruto, and congratulated him after he win the hotly contested race.

"Today I spoke with President-elect William Ruto of the Republic of Kenya to congratulate him on his election success. We reiterated our firm commitment to continue strengthening the Somali and Kenya bilateral ties and discussed taking on our shared global and regional challenges." This comes few hours after Raila and his camp rejected the presidential results, saying that they were compromised, and will be heading to the Supreme Court to seek intervention in nullifying the win.

Raila termed the results null and void, shortly after 4 IEBC commissioners distanced themselves from the results announced by Chebukati, on claims that they had Mathematical discrepancies, that would have affected the final tally.

With the country resuming its normalcy, leaders have urged Kenyans to maintain peace, with those allied to Ruto's team urging the Azimio side to pursue the rule of law instead of causing drama around.

A number of constitutional lawyers and political experts have dismissed the Azimio team, saying that the fact that they did not question the integrity of 34As forms, implies there is no case to answer.

"People are Going to Get The Biggest Shock" Lawyer Now Says, Alleges US Factor in Ruto's Cabinet

Revealed: What Azimio's chief Raila Odinga Will be Doing Today With his Allies