The headline focuses on the BBI report which is before parliament. The nation reports that handshake partners president uhuru Kenyatta and Raila Odinga have rejected declaration that the Proposed 70 Constituencies are unconstitutional.

Singled out for blame is Siaya senator James Orengo, his Nyamira Counterpart okongo omogeni and Rarienda mp otiende Omolo who led the joint Commitee of the Senate and National assembly.

Jubilee vice chair David Murathe has already stated that the report means nothing because the final say rests with wanjiku.

Raila's spokesperson said that they expect opposition only from those people who have been opposing the BBI from the beginning.

On the other hand Ruto's ally and Soi mp Caleb Kositanyi Insists that the document has a lot of illegalities especially the issue of 70 more Constituencies.

In another story, the deputy president William Ruto's plan to revamp the economy should he get Elected next year is taking shape.

The nation Reports that he has taped Ex-Kibaki Economists for Strategy. They include former central bank Gorvenor Njuguna ndungu and economist David Ndii among others.

On April 22, Ruto held a meeting with Mr ndungu at his Caren office and this is what he had to say.

"The state of the global economy demands new thinking, bold ideas and fresh paradigms. We must include more Kenyans in the growth of our country. This is why we are proposing a bottom-up approach to develop the economy.

This approach will ensure more resources are invested in the grassroots, greater economic participation and an expansion of the tax base.

It is gratifying to see economic experts endorsing this approach and expressing willingness to partner with us to actualize this revolution" Ruto said on Twitter. 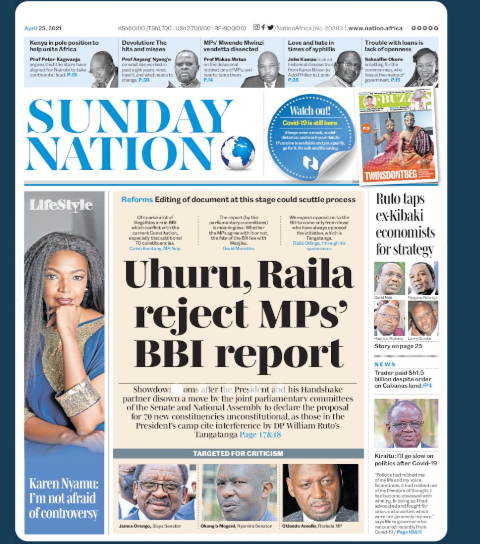 In another story, tangatanga leaders from Central have set conditions for Supporting Ruto's bid for presidency. It's now up to the deputy president to consider the demands.

In sports, the English premier league title favourites Manchester city will today face off with the London side Tottenham Hotspur in carabao cup. 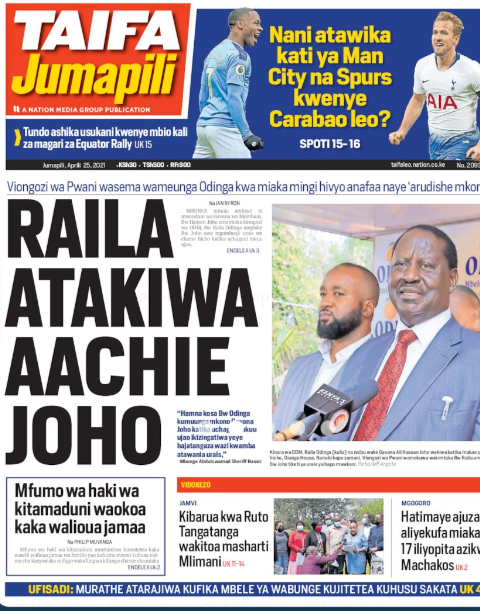 The main headline on the Standard is about the many obstacles lined up on the road to next year's general election which may cause delay.

The MPs have to deal with the delicate and highly politicised issue of delimitation of boundaries for 70 Constituencies.

After that, the country has to hold a refrendum and the independent and electoral boundaries Commission (IEBC) has to be fully constituted. All these need to be done before August 2022.

In another story, Meru Gorvenor kiraitu Murungi has finally broken his silence on his battle with COVID-19. For these and more stories grab yourself a copy of your choice. 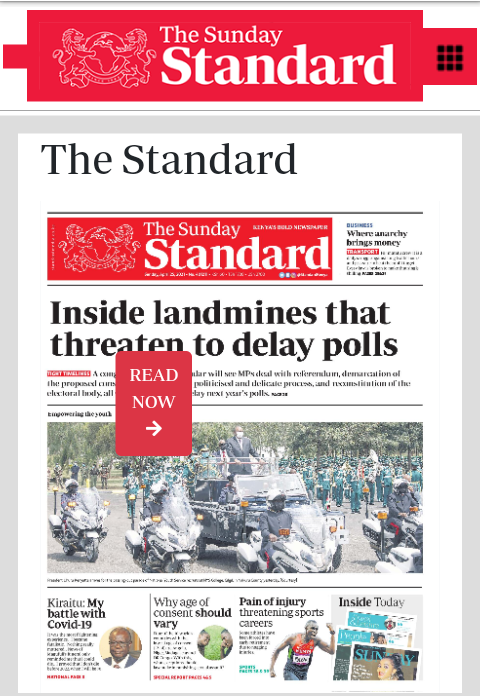 Do you think Ruto's economists will help revamp Kenya's battered economy? Feel free to share your thoughts and comments on this on our comments platform.