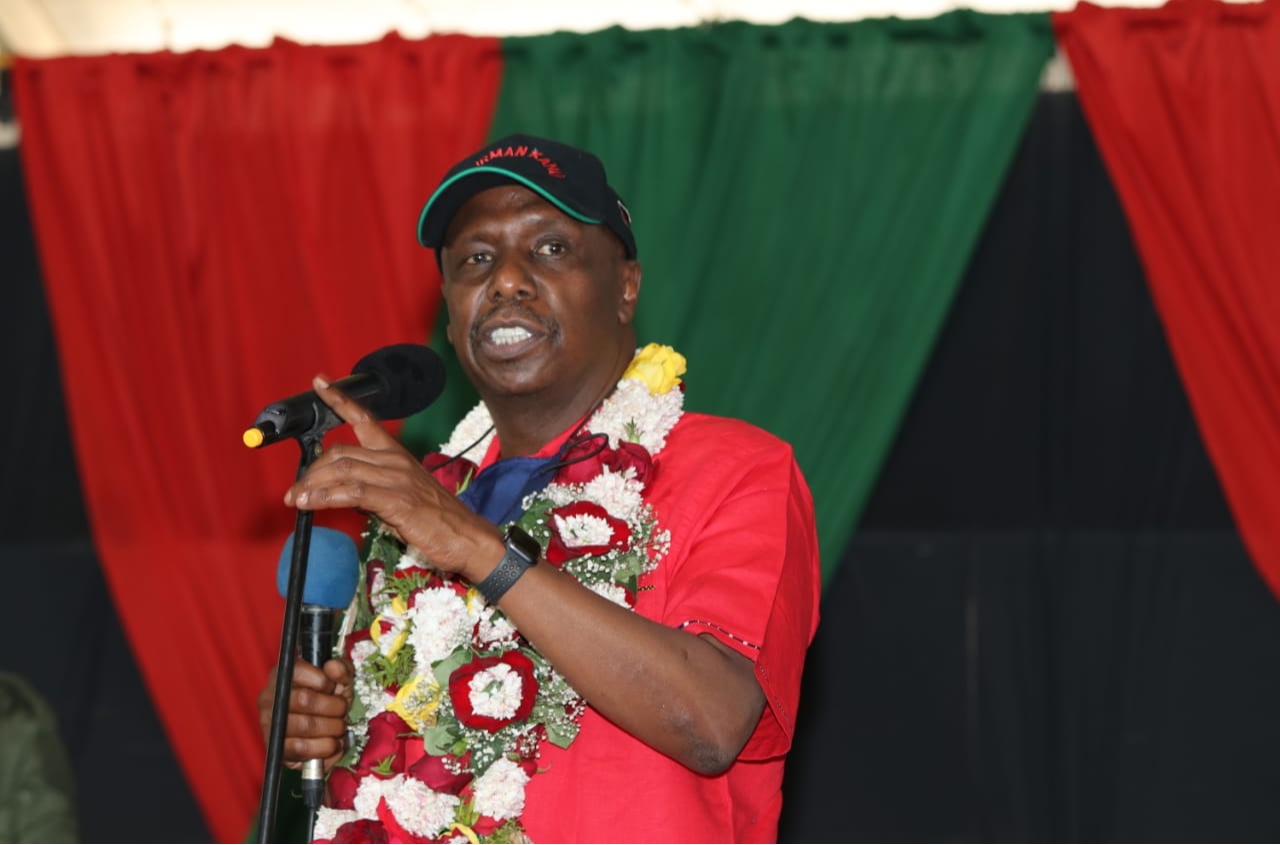 The race for the presidency in the August 2022 General Election is fast gaining pace with political bigwigs now declaring their interest in running the next government after President Uhuru Kenyatta retires.

According to reliable sources on Monday, September 27, Deputy President William Ruto, who is upbeat in clinging to power in 2022, has been dealt a blow in his quest.

His political nemesis, Kanu chairman Gideon Moi, has now declared he will vie for the presidency in 2022 and appealed to his community not to backstab him.

The two leaders come from the same community and this means that the votes from the region will be divided, a major setback for the Deputy President.

According to the Baringo Senator, his ambition is to uplift the living standards of all Kenyans and unite communities irrespective of their tribal or political affiliations. 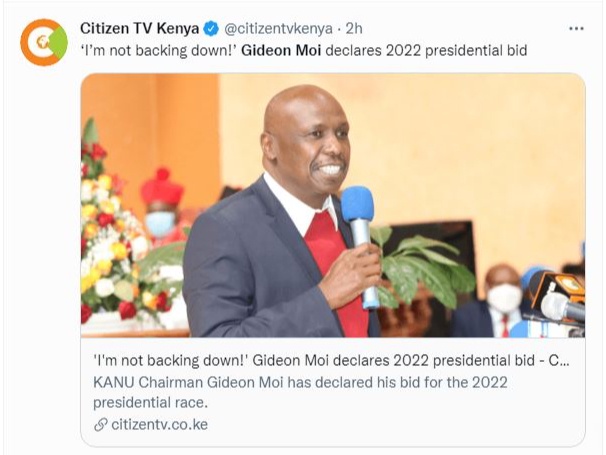 Speaking on Sunday at his Sacho home after attending a church service at the African Inland Church (AIC) Tandui in Baringo Central, Mr Moi expressed confidence that he would trounce his opponents if he gets backing from the Kalenjin community.

The younger Moi, who was handed the family's power baton during the funeral of his father,  promised to transform the country, especially areas that are lagging behind in development.

“I have already made an ultimate decision and I am not backing down however tough the duel is. I am only asking my community to support me in this journey,” Gideon stated.

“If I lose, I will have lost humbly than being despised and if I win, it will play to our advantage as well,” the younger Moi added.

Give him a chance

The Baringo senator appealed to the Kalenjin community, on whose backing his father rode to the leadership of the country and maintained a 24-year tenure in government, to give him a chance to prove himself.

“I am your own son and you had enough confidence to vote for me as an MP for five years and a senator for two terms. We should also walk together to State House because I promise not to disappoint you,” the Kanu chairman stated.

Gideon maintained that the party would make a declaration on September 30 at the Bomas of Kenya but he did not want to pre-empt what was in store.

“I promise that I will come back home after the Bomas of Kenya declaration next week to seek your blessings because we need to speak in one voice if my political ambition is to come into fruition,” he said. 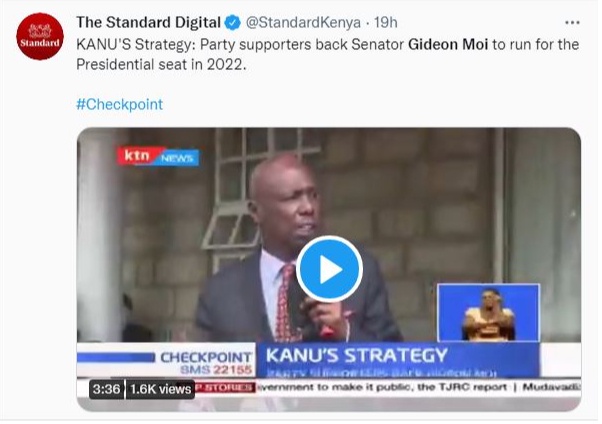 With his declaration, the battle for control of the vote-rich Rift Valley is shaping up and Baringo County is now emerging as the epicentre of the tussle pitting DP Ruto against Mr Moi and their supporters.

The two leaders have in the recent past been engaging in supremacy battles as they flex their muscles for their 2022 presidential bids.

According to sources, Moi’s political rally at his home, which was attended by religious leaders, elders and local leaders, was seen as a move to seek blessings from his community before beginning on his quest to vie for the presidency.

Sadly, his announcement comes at a time his allies— West Pokot Governor John Lonyangapuo, former minister Musa Sirma, Ainabkoi MP William Chepkut and a host of MCAs— have defected and all, but the governor, joined DP Ruto.

“This region cannot continue providing the stage for political theatrics as we move closer to the General Elections at the expense of the people while other regions are focusing on development. We have our two sons vying for the top seat and that should not cause divisions because whoever wins will be to our great advantage,” Baringo County’s Woman Representative Gladwell Cheruiyot said.

“Senator Moi has gained enough experience to lead this nation and we are urging him also not to be distracted by his political rivals who have already sensed defeat,” she added.

According to West Pokot Senator Samuel Poghisio, the independence party was united and had entered into coalitions with other parties to form a formidable base ahead of the polls. 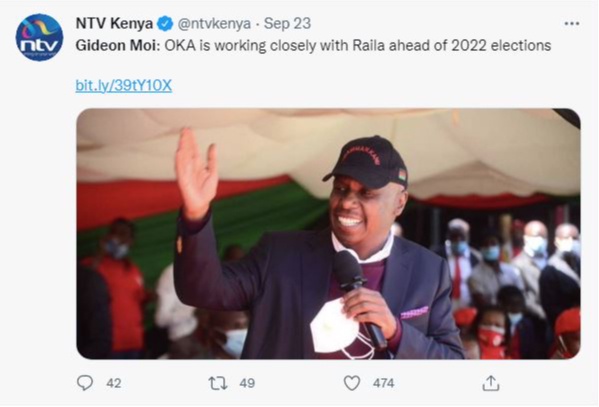 Kanu secretary-general maintained that they had supported other parties since 2002 and appealed to Kenyans to support them in the next general elections.

He announced that plans were underway for the independence party to unveil its master plan to Kenyans.

Gideon was seen as a 'State project' in the coming elections and his declaration comes at a time when ODM leader Raila Odinga, who is also alleged to be backed by the State, met four Mt Kenya governors who pledged to rally the region to support the ODM leader.

In a statement to the press, the county bosses said their meeting with Raila will be followed by a series of other consultative meetings across the region that will conclude with a declaration.

“We shall plan and coordinate a structured engagement with the region focusing on elected leaders, community leaders, business leaders, farmers’ organisations, the faith organisations and key opinion leaders and shapers in the region,” they said in the statement.

In the press statement read by Muriithi the governors said they discussed among others; expanding local economic opportunities, growth of the economy supported by sound institutions; including cushioning SMEs.

On his part, the ODM chief stated that this was part of a national dialogue he has been engaging in, to be able to identify the problems affecting different parts of the country and come up with policies to address the issues.

And just like the Rift Valley, Mt Kenya region remains divided on who to back in the 2022 presidential election.

A section of the region's leaders has declared support for Deputy President William Ruto, insisting that he is the man best placed to succeed Uhuru. 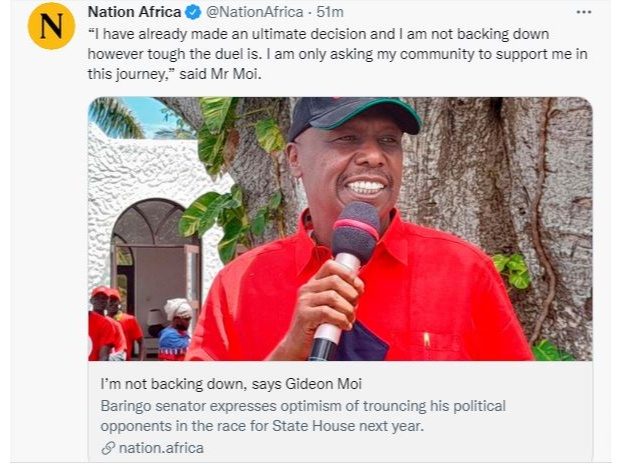 On the other hand, lawmakers in favour of the handshake between Uhuru and Raila claim the former PM is best placed to take over the leadership of the country in 2022.

Further, the Mt Kenya Unity Forum led by Martha Karua (Narc Kenya), Mwangi Kiunjuri (TSP) and Moses Kuria (CCK) has also maintained that the interests of the people of the region must come first.

As this continues, only time will tell which candidate has the best chance to succeed President Kenyatta when he retires.

The Government Names The People Who Are Set To Be Given Jobs To Construct 10,000 Classrooms In Kenya