By Masonhaz10 (self media writer) | 4 months ago 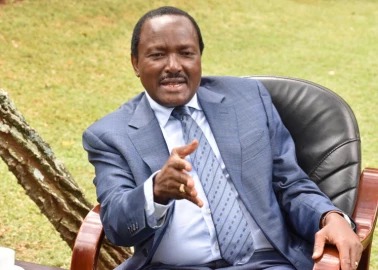 Leaders in Kalonzo Musyoka’s Wiper Party now say that Kenya will be forced to conduct repeat polls come August if Musyoka pursues his presidential bid or fails to support any presidential aspirant.

Led by Matungulu MP Stephen Mule, the politicians say that neither the ODM presidential flag bearer Raila Odinga nor his Kenya Kwanza counterpart William Ruto, can meet the 50+1 vote percentage requirement to win the presidency without Musyoka’s support.

There have been talks of wooing Musyoka back into the 'Azimio' coalition which he recently ditched after missing out on the running mate slot which was handed to NARC Kenya leader Martha Karua.

“This decision of coming back to ODM is the deciding factor in this election,” Mule said on Tuesday during Citizen TV’s Day Break show.

“If Kalonzo muscles up his troops across the country and moves forward to run for presidency, I can assure you that neither Raila Odinga nor Kalonzo Musyoka can get the 50+1 percent. It’s a fact.”

While citing recent opinion polls which have been projecting both Odinga and Ruto’s popularity at slightly below 40 percent, Mule argued that the figures were higher before Odinga gave the running mate post to Karua.

“Before the naming of the deputy president by Hon. Odinga, they were at par at 42 percent, which included Kalonzo’s support. When he pulled out, the numbers changed to 39, and it affected 'Kenya Kwanza’s' numbers as well,” said Mule. 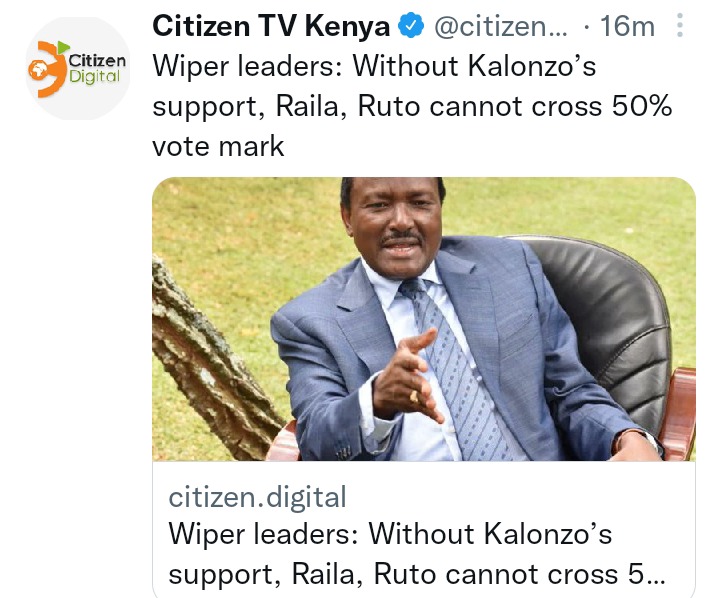 “It tells you that the determining factor in this election is none other than Dr. Stephen Kalonzo Musyoka.”

Mule was among the Wiper Party leaders from the lower Eastern region who on Monday announced that they have resolved to work with the Odinga-led coalition under what they described as structured dialogue.

He went on to add: “As Wiper leaders we are very clear; we are campaigning for a government led by Hon. Kalonzo, backing Hon. Odinga and running mate Martha Karua.”

His comments came amid numerous calls from not just the Wiper party but also Ukambani region professionals and the clergy, who have been beseeching Musyoka to shelve his presidential bid and return to ODM.

Asked whether they have engaged Kalonzo directly about the return, Mule told the host Trevor Ombija that Kalonzo, who is currently on a week-long UK tour, has agreed “for the sake of Kenyans”.

“He said that Kenya is bigger than an individual and he is willing , for the sake of Kenyans and for the sake of winning this election early enough, to consider this decision,” he stated.

He added: “He will join the ODM team on the campaign trail once he returns to the country. This time round, no conditions, it is Azimio’s turn to know how they will replan themselves. The condition now is uniting Kenyans.”