By MarkoMaloba (self media writer) | 4 months ago 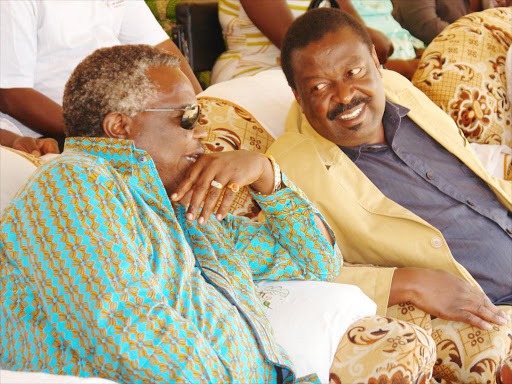 The COTU boss said that the two leaders were the main reason the Luhya unity, that was only once achieved by former vioce president the late Michael Wamalwa Kijana in 2002, remain elusive about two decades later.

"I called on the two Luhya leaders to merge their parties so that we can have a unified Western Kenya party but the have refused. They are resisting because those are political kiosks they use to negotiate with to get money from frontrunners like ODM leader Raila Odinga," said Atwoli.

He claimed that the two were using their parties to bargain for endorsement perks as high KSh 700 million from presidential front runners leading other parties.

Atwoli who has openly endorsed Raila's handshake with President Uhuru Kenyatta, championed for the stalled Building Bridges Initiative (BBI) Constitution Amendment Initiative said that he had spent much of his money trying to achieve Luhya unity but the two leaders, among other Western Kenya politicians had remained to be an impediment.

"I have spent money on them. I spent KSh 200 million on Musalia Mudavadi on December 31, 2016. It is laughable that his communications person Kibisu Kabatesi is having his medical bills paid by William Ruto yet he is calling me a political broker. Barack Muluka is close to Mudavadi and works for Ruto, is he his ambassador? Eliud Owalo also Mudavadi's ally works for Ruto. So who is the broker here?" Atwoli posed.

He went ahead to claim that One Kenya Alliance fronted by Mudavadi, Wetang'ula, KANU leader Gideon Moi and Wiper's Kalonzo Musyoka was plotting to ensure the 2022 General Election ends in a rerun after non of the top candidates achieves the 50 plus one percent of all votes threshold.

"They are saying they want to pressurize for a rerun so that in the next round they can side with Ruto. They want Raila and Ruto not to win so that they can do business. I do not need any seat but as an elder I can assure you we will win against Rutyo in first round by 10.0am. The 2022 election will see the largest number of voters," Atwoli said.