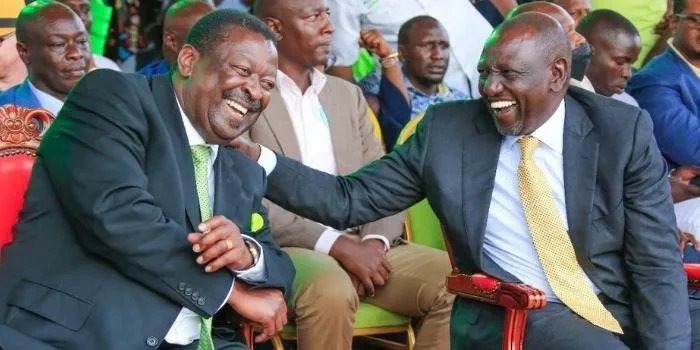 Deputy President William Ruto found himself in a pickle after failing to recognize the presence of Amani National Congress leader Musalia Mudavadi, casting doubt on their newly formed political union.

At the rally in Kapsokwony, Bungoma county, Musalia Mudavadi and his Ford Kenya counterpart, Moses Wetangula, accompanied the second in command and an entourage of MPs allied to the United Democratic Alliance.

Ruto sold his bottom-up ideology extensively and then introduced his allies, among whom was Wetangula, before concluding the rally, only to be reminded by the crowd that the former Vice President had not yet addressed them.

Wetangula was also seen signaling to the Deputy President that Mudavadi had not yet spoken, prompting the DP to introduce the former Vice President, who was tucked away on one side of the road.

Mudavadi took the podium to speak, promoting his earthquake slogan and pledging his allegiance to the newly formed alliance. Additionally, he criticized former Prime Minister Raila Odinga for being a "government project."

"I Will Send Him Home Permanently" Matiang'i Vows