Lawyers Donald B Kipkorir and Prof.Makau Mutua in the above photo

SUNY distinguished professor and former Buffalo law school professor Makau Mutua and corporate lawyer Donald B Kipkorir who are ardent Azimio La Umoja Kenya One Alliance supporters have told the deputy president William Ruto to keep off their affairs.This as after the Deputy President advised and sided with Kalonzo Musyoka to keep off the ongoing Azimio la Umoja Interviews slated for Wednesday 4th May and Thursday 5th May.The interviews are meant to choose Raila Odinga's running mate who will deputize him as he seeks to ascend to the top seat in the country.

Professor Makau Mutua who is a known loyal fan of Raila Odinga and served in Raila's steering committee as he vied for the 2017 general elections called Ruto a rich hypocrite and told him to choose Kalonzo Musyoka as his running mate if he cared so much.He asked Ruto to stop poking noses into Azimio affairs since he did not belong there and as unwanted.The distinguished professor confrimed that the interview process was inclusive and participatory unlike theirs which was opaque. 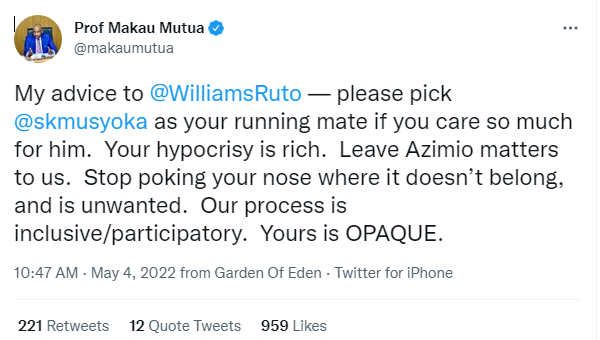 In defense of the Azimio decision to vet their candidates for the deputy presidents position, lawyer Donald B Kipkorir said what Azimio was doing was constitutional and said trying to intimidate and blackmail the decison was out of order.He also asked if the deputy president's party was scared of Raila choosing a Kikuyu or Meru running mate and wondered why they were concerned about Kalonzo's position and pushing for him to be Raila's deputy. 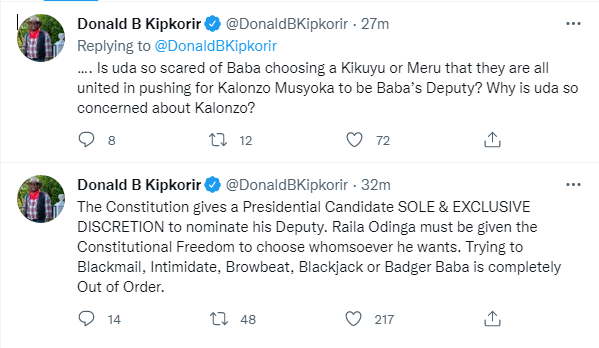 Wajackoyah Sends A Shocker To These People

What DP Ruto Is Expected To Launch Today That Will Boost His Presidential Bid.

Wajackoyah Reveals What He Will Do When He Visits Sugoi

'When you saw me sleeping on my car in Kisumu, I was talking to Raila in a dream' Wachakoyah says

Funny Cartoon Of Deputy President William Ruto Being Held Behind By ICC In The Presidential Race.