After ditching Azimio la Umoja one Kenya coalition and staged his camp to vie for presidency, Mr Kalonzo Musyoka has left many of allies who were under the umbrella of Azimio to run or deputize some of politicians in various elective posts in August 9th General elections. The one who have faced the same headache on whom to follow between Mr Odinga and Musyoka is Azimio la Umoja deputy governor candidate Philip Kaloki. 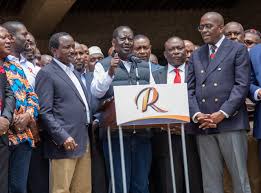 However, the deputy Governor candidate for Nairobi county while Speaking on Thursday on K24 TV, Kaloki who is from Kalonzo Musyoka led Wiper party he has maintained that they have not been asked to drop their support for Raila's presidential bid.He revealed that they are abiding to their initial agreement that saw Jubilee (Polycarp Igathe)and Wiper(Kaloki) produce the Nairobi Gubernatorial aspirant and deputy governorship candidates for Azimio la Umoja.

"Because of the coalition agreement that is there, my presidential candidate at the moment is Rt. Hon. Raila Amollo Odinga, that's the candidate that we are supporting. We don't have any directions contrary to this position," Kaloki said 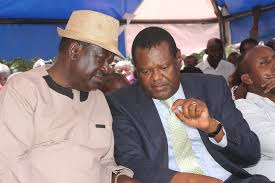 He said that their role now is supporting Raila Odinga to be the fifth president of this country as he disclosed that Nairobi where he is running as deputy governor, the majority of our voters are also supporting Raila Odinga. His words come after many Kenyans raised concern over what would happen to the Azimio gubernatorial ticket in Nairobi Gubernatorial race after Wiper left the coalition.