Opinion Poll - Between The Two, Who Will Be Your President Next Year

By Vision+Kenya (self media writer) | 22 days ago 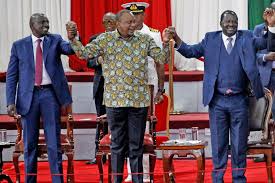 The presidential race is expected to be the toughest as president Uhuru Kenyatta exits office. As it has always been in the past, in every general elections in Kenya only two candidates appear to have influence and for that case, political heavyweight Raila Odinga and deputy president William Ruto appear to be the two horses, we take a close at them and then we judge on who is the best;

He is the son of the late co-founding father of the nation, Jaramogi Oginga Odinga. Raila has made history in his fights for democracy making him to be tortured and detained by the Moi government. Raila played a key role in the failed 1992 attempted coup that its aim was to end the despotic rule of that time, in 2002 he put his political aspirations aside and decided to support former president Stanley Emillio Kibaki whom he campaigned for him while he was nursing injuries at hospital in London, he delivered the victory.

In 2005 he formed the Orange Democratic Movement party and in 2007 he battled it out with William Ruto for the party's ticket and he won making Ruto to be his running mate, he would later become a prime minister on the grand coalition that saw him and Kibaki campaign for the 2010 constitution while Ruto against it.

He has run for presidency unsuccessfully in 2013 and 2017 which witnessed malpractices. In 2018 Raila together with president Uhuru Kenyatta came together to restored harmony in the nation. We expect him in the ballot next year and i believe, we believe is the ideal candidate.

He is the current deputy president and the party leader of the newly formed party of United Democratic Alliance. He has been in active politics since 1990s and was key in the Moi government especially in the youth for KANU (YK). He has served as a member of Parliament for Eldoret North, minister of education and also Agriculture, he has served as the deputy president for nine years now.