"Mudavadi must deliver 90 per cent of the Vihiga votes," Dp Ruto

By Osamborodgers (self media writer) | 2 months ago

Kenya Kwanza Alliance presidential aspirant Dr William Ruto has told Mr Wickliffe Mudavadi that he must deliver 90 % of his Vihiga backyard votes stating that 75 % being proposed by the voters is "too little." 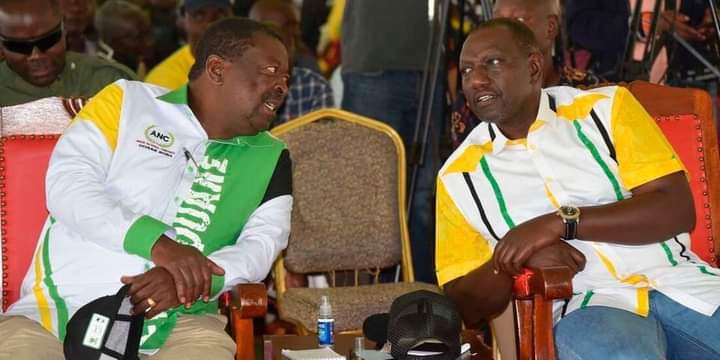 While speaking in Hamisi, Vihiga County, the deputy president said that in order to win the August polls, Mr Mudavadi has to come out and make sure that Vihiga County residents must come out in large numbers and vote.

He further went ahead and said that Azimio La Umoja One Kenya coalition had already teamed up with the government to victimize the Independent Electoral and Boundaries Commission. He told the locals that as a coalition they were doing everything possible to make sure that their votes are not stolen.

Previously Ford-Kenya party leader and Hon Musalia Mudavadi were given an uphill task of delivering 70 % of the Western votes. This agreement brought a lot of stir and commotion among the voters as it was viewed as impossible.

In the 2017 general elections, Raila Odinga under NASA grabbed 90 % of the Vihiga votes and enjoyed a massive support from the Western region too.

Bungoma senator Moses Wetang'ula while speaking in the same rally, urged voters to vote in Hon William Ruto since his vote was a vote for Musalia Mudavadi and him.

Hon Mudavadi however taken the opportunity to shoot president Uhuru Kenyatta directly citing that awarding a charter to Friends Kaimosi University College is a right and not a privilege. He made these remarks after the head of state awarded Friends Kaimosi college a charter to operate independently as a University and not as a Constituent college of Masinde Muliro University of Science and Technology.

Content created and supplied by: Osamborodgers (via Opera News )

President Ruto to Jet Out of The Country For Another Foreign Trip; Destination Revealed

"When You Make Speaking In Tongues A State Affair Every Month There's A Problem, "Muslim Sheikh Says