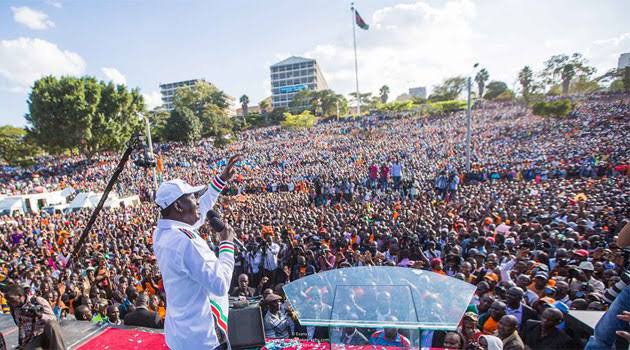 In accordance with the Kenyan constitution general elections are scheduled at the interval of five years and it brings contestions in the six elective seats ranging from the president to members of county assemblies.

The most contested seat will be that of president considering the weight it carries to the lives and development of the country. The major contest will be between Orange Democratic Movement party leader Baba Raila Odinga and deputy president William Ruto.

The elections will be determined by who has the highest ability of mobilising voters to vote for them and below are three battle grounds that will have much consideration by Raila Odinga and DP Ruto;

The country's capital has the highest population and number of voters and has been Raila Odinga's stronghold, William Ruto will try to convience the Nairobi people to vote for him as Raila Odinga efforts to keep his stronghold.

The county also has the second largest population in Kenya and it will be a major battle ground between Raila who has the support of governor Lee Kinyanjui with Ruto having the support of Susan Kihika.

It has the third largest population in Kenya and it is the home county of president Uhuru Kenyatta who hails from Gatundu South constutuency. Raila has governor James Nyoro on his side with woman representative Gathoni Wa Muchomba supporting Ruto.

Who do you think will have the favour of the counties?, thank you.

Charged Crowd Rejects Two MPs, Humiliates Them In Front of Ruto in Kirinyaga

2 Reasons D.P Ruto's Visit To Kirinyaga Might Calm Rivalry Between Waiguru And Ngirici(Opinion)

Ruto Lectures Kirinyaga Leaders Over Violence, Informs of Who Will Decide Their UDA Ticket (Video)