What Gideon Moi Went to Do in Garissa

By HabarIbuka (self media writer) | 8 months ago 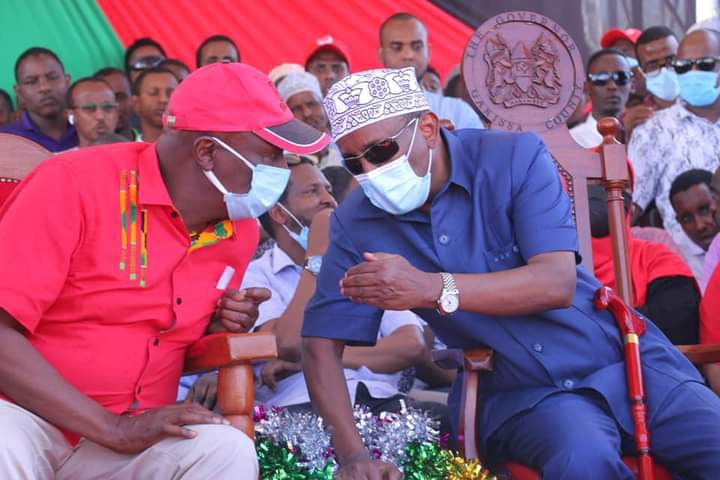 Korane also declared that Garissa county was ready to pass the BBI report once it is availed for debate at the County Assembly.

Korane who was speaking at Garissa Primary school grounds hosted Moi and a number of MPs and MCAs while drumming up support for the BBI process in Garissa county.

The Governor who is also the co- ordinator of BBI team in North-Eastern region, called on residents to vote for the report during the referendum saying it was the brainchild of respected Garissa Senator Yussuf Haji and contained alot of benefits for the people in the region.

“Vote for BBI because Garissa cannot afford to be in the opposition. We must be in government and take full advantage of the 35 per cent increase in our revenue allocation from the Treasury as well as the Sh.200 million of Ward Development Fund that comes with it,” Korane said.

At the same time, he called on the KANU Chairman to lead a delegation of leaders from Garissa to State House to petition for the creation of Hulugho Constituency as a token to the County for supporting BBI.

“We had hoped we would be given this constituency and we ask you bwana chairman to lead us to see President Uhuru and ask for it,” he said.

Korane revealed the other issue area leaders had asked for was the scrapping of the disputed 3-mile strip border with Tana River, a dispute which he said had been left to be addressed by a commission which will be set up to investigate the same.

“When that time comes, we will be ready with our petitions and our maps to make our representation to the commission,” he said.

Korane also called on Interior CS Dr. Fred Matiang'i to set up a commission to investigate and adjudicate on the thorny issue of the border between Garissa and Isiolo counties; a dispute that has left scores dead and property valued at millions of shillings destroyed on both sides of the conflict.

“We have been neighbors for over 138 years with the Borana and we will not let this issue be the one to end our long lasting friendship and kinship,” Korane said.

He added: “All we ask the CS to do is to set up this commission of inquiry where we can present our case and have a thorough and more reasonable verdict reached on this volatile issue unlike what the CS did with his declaration in Nairobi a week ago”.

On 2022 campaigns, Korane called on all aspirants to show restraint and embrace peace as they canvassed for votes from wananchi.

On his part, KANU Chairman Gideon Moi challenged the youths to embrace the BBI Bill saying a lot of their needs had been factored in the document.

“The BBI has taken care of the needs of all, from women, the elderly and the youth.

“There is a four-year grace period for those who have education loans, a seven-year tax holiday for start-up businesses and it has offered an opportunity to women by giving them a chance to achieve the two-thirds gender rule,” he said.

Gideon also thanked the people of Garissa for electing three MPs and seven MCAs on KANU party ticket in the last elections.

“This is the highest the party got anywhere in the country and I am grateful for your confidence in our party,” he said.

Gideon also said all were ready for the referendum scheduled for early next year, noting the key agenda of the amendments as spearheaded by Kenyatta and Raila is to have a united country where all Kenyans will be empowered.

“BBI is all inclusive and brings all Kenyans together. It will uplift lives of the people and the society and I don’t see why someone would not support it,” he said.

His sentiments were echoed by 50 Garissa MCAs led by Assembly Speaker Hon. Ahmed Abass including the Majority and Minority leaders.

Earlier, Governor Ali Korane had a breakfast meeting with Kanu party leader and members of the county assembly at his residence before attending the BBI rally at Garissa Primary playground.

Breaking: Nairobi County to Have the First Female Governor After Friday's Ruling by the Court

Good News To Dp Ruto As The Letter Listing Him As Key Witness To Arror Kimwarer Dam Case Is Fake.