By MajorEvans (self media writer) | 2 months ago

The British Broadcasting Corporation, BBC has today Revealed secret details about the Deputy President, DP Ruto to World as the National Broadcaster of the United Kingdom which is based in London walked the World through DP Ruto's life from Childhood to one of the Presidential powerful candidate. 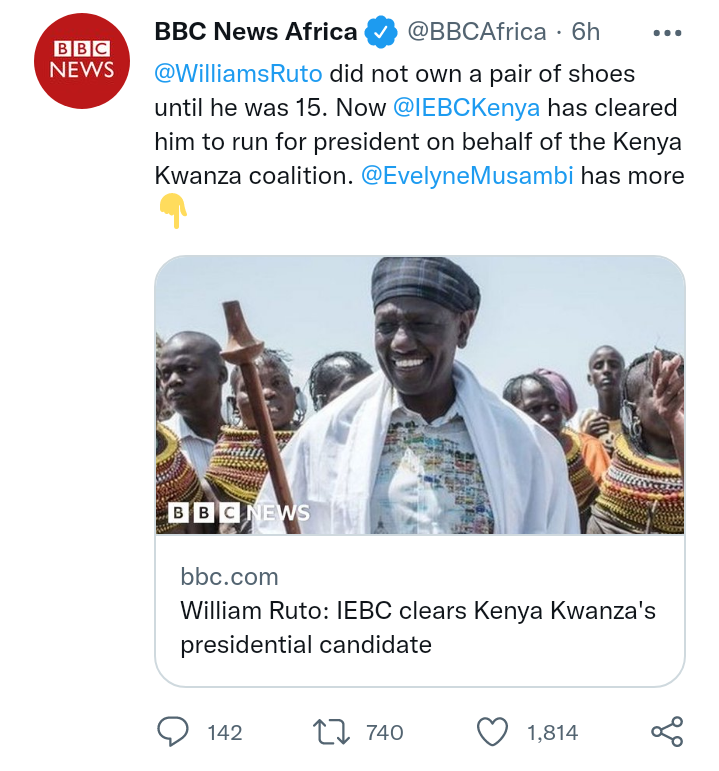 In an article written by BBC hours after he was cleared by the Independent Electoral and Boundaries Commission, IEBC to vie for the August polls, BBC has revealed that Ruto went to school barefooted wearing his first shoes while 15 years.

“So it comes as no surprise that he portrays himself as the champion of the poor as he vies for the presidency in elections due on 9 August." The article reads in part.

The article has also described DP Ruto's journey to politics, their political Union that led to emergence of Jubilee administration before President Uhuru welcomed his handshake brother Raila Amolo Odinga.

Latest Provisional Presidential Results According To Form 34B As At 8:50am Saturday

Raila Or Ruto? Latest Presidential Results For Ruto, Raila As Per The Standard Group

JUST IN: Azimio Leaders Have Arrived at KICC for a Major Event to Be Chaired By President Kenyatta

Kiрсhumbа Murkоmen Reveals The Real Situation at Bomas of Kenya