Former Kakamega senator Bony Khalwale has told Raila Odinga to stop using small positions that have been held by Lugha leaders in the past to bait His hook and attract them again, claiming that He is looking down upon them and that might ruin His Chances of ever getting Lugha Votes throughout His political career.

Khalwale claims that Mudavadi held the position of Deputy Prime Minister and even Vice president together with the late Michael Kijana Wamalwa, while the Speaker position has been held by Kenneth Lusaka, and therefore they need to focus on upper positions and not those ones. He further stated that Odinga should stop using such methods to trap the adding that it's very disappointing that He doesn't value the community since He can't support their leader to take the Presidency, and that may Shift the support to Ruto's side.

"I would like to tell you Raila that We are tired of trying tu fix us with small baits here and there. Mudavadi held Deputy Prime Minister position and Wamalwa held vice president position and even some minister positions. The speaker position has been held by Lusaka and therefore we want to be supported and take the leadership of this Nation completely. Raila does not consider this because He always takes us as His puppets and this may ruin His future support Here. " Khalwale says. 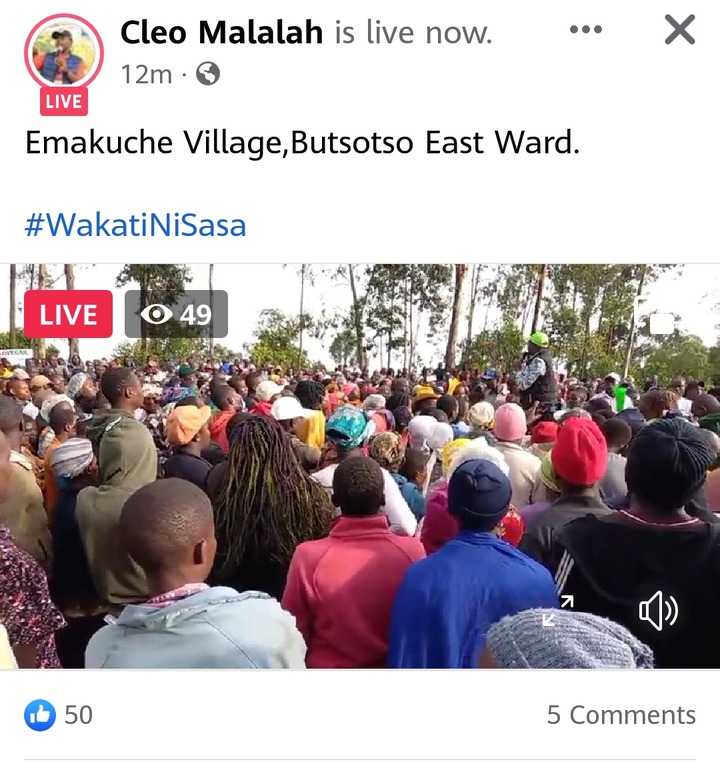 He further stated that their rival Ferdinand Barasa is being funded By President Uhuru Kenyatta to fight Them, together with an amount that their Governor Wycliffe Oparanya has allegedly stolen from the County public coffers, hence buying new vehicles and splashing the money around to get voters hoodwinked. The UDA Politician claims that they won't succeed since Kakamega people are getting clever by the day and they will even consider chasing them away.

"I and Malala have run short of Campaign funds because our rival Barasa has Billions to spill over, since He gets direct funding from President Uhuru Kenyatta and His friend Oparanya who loots the public money. This cash has been used to buy new campaign vehicles that makes noise for us, and even some is used to try and bribe you to shift your attention. This is impossible at this time because our people are very bright. They won't be bought. "He added.

Khalwale was addressing people in Emakuche Village in Butsotso Ward in Kakamega.