The 1997 Project, Inside Uhuru’s Risky Plan To Deny Ruto, Raila The Presidency, But Give Mudavadi

By WawireCornel (self meida writer) | 10 days 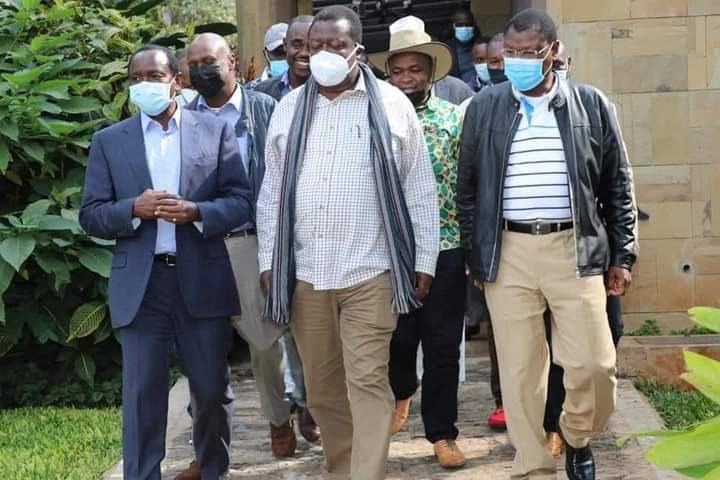 It has been revealed that President Uhuru Kenyatta will use the '1997 Project' to deny his deputy, William Ruto and his Handshake partner, Orange Democratic Movement (ODM) Party leader Raila Odinga the presidency.

According to political commentor Gordon Opiyo, President Uhuru Kenyatta and his advisers believe beating DP Ruto in the right round will be hard.

Therefore, they have device a way of separating votes in various regions to make sure he doesn't garner the 50% votes required to claim the top seat.

Their project has been named the 1997 Project since it was used by Kibaki to win the Presidency.

"A little Bird with deep connections inside the Kenyatta Family tells me that the latest project is dubbed "Project 1997." This is the election results that gave Moi 40%, Kibaki 31% and Raila 10%. According to the little Bird, it is impossible to beat Ruto in the first round and it is too risky for the Kenyattas to trust Raila. Especially after his promise to jail the "SGR Thieves," wrote Opiyo.

To split votes in various regions, Opiyo noted that an insider told him the Uhuru will heavily fund the Western and Ukambani candidates to make sure that the two, (Ruto and Raila) gets the least votes in these areas.

More so, Interior Cabinet Secretary Fred Matiang'i will also go for the seat to make sure the duo don't get anything to Kisiis and Kuria.

In Mt. Kenya, Speaker Justin Muturi, Mwangi Wa Iria and Uhuru subtle support for Mudavadi will make sure he gets the highest votes in the region.

In the Coastal region, it has been noted that various parties will scuffle votes from the region to make sure no one gets a bigger percentage.

After attaining their target of making sure neither DP Ruto or the former Prime Minister wins in the first round, the Anti-Ruto brigade will join behind Mudavadi/Gideon Moi's ticket, and this is how their party will attain a 60% win in the run-off.

However, the 1997 Project could turn risky if at the end DP Ruto will be joined by ODM leader Raila Odinga against their opponents.

"The only risk in the 1997 Project is that Raila may, in a desperate last minute move direct his voters to Ruto in the second round," noted Opiyo. 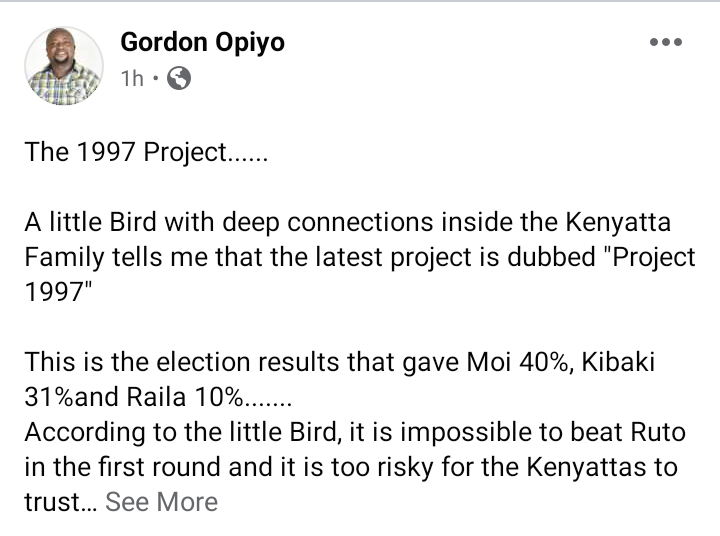 "Stop Your Hustler Hogwash That Is Meant To Keep The Youth In Poverty," Matsanga Tells William Ruto