The Government Will Reclaim Seized Prison Land Taken By Officials

By MarcusMbugua (self media writer) | 11 months ago 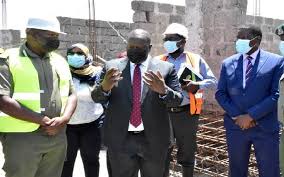 The government has begun reclaiming prime land owned by the Prisons department that has been taken over by senior officers over the years.

Dr. Fred Matiangi, Interior Cabinet Secretary, stated that an examination of land owned by the State Department of Correctional Services implicated Ministers, PS, and high government officials in the theft.

He stated that the Ministry, in cooperation with the National Lands Commission, will immediately begin the process of reclaiming the property that was intended for the expansion of jail facilities.

"When you look at the list of those who stole that land, you can see who has previously been a Minister in charge of this department, a PS, or a Commissioner-General in the correctional service." "It's a disgrace," he said.

The CS bemoaned that the snatching spree had been so extensive that what remained in some institutions was only a percent of the initial allocation, citing Yatta, Eldoret, and Kapsabet GK prisons as good instances.

"I just got out of Yatta Prison in Machakos County." The size of the facility has been reduced to 15 acres. According to the commandant, it feels like a student quarter. They are practically squatting on territory that they effectively own!" he exclaimed.

Other facilities that have been affected include the Kapenguria GK Prison, Murang'a Juvenile Remand Home, and Mwea GK Prisons, among others. To protect the remaining land from further encroachment, the CS announced the initiation of a "aggressive titling initiative" that will include validation and collaborative land mapping in collaboration with the NLC and the Ministry of Lands in order to supply inmates with legitimate and secure title deeds.

He was speaking after viewing the development of the Kenya Prisons Service Hospital at the Prisons Staff Training College (PSTC), Ruiru.

The Level Four hospital is one of four specialized hospitals for disciplined services being built in the country as part of the Big Four agenda investments in the health sector.

"As a result, our capabilities and provision of medical care to disciplinary forces will be unrivaled in the region."

Concerning pending invoices accrued by the State Department of Correctional Services, Dr. Matiang'i stated that claims totaling more than Kshs. 980 are still overdue due to claimants' lack of adequate proof.

Content created and supplied by: MarcusMbugua (via Opera News )