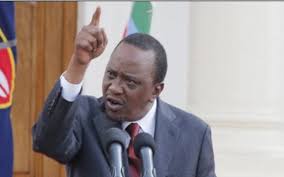 Speaking at the African Independent Pentecostal Church of Africa (AIPCA) in Kandara, Murang’a County, President Uhuru Kenyatta maintained his stance by declaring his support for the handshake of March 9th 2018 between him and Orange Democratic Movement party leader Raila Amollo Odinga which stabilised the country that was already in chaos.The President said that his vision is focused on the need for unity and prosperity of this country now and future.

Uhuru who was seem responding to the AIPCA's Archbishop Frederick Wang'ombe who was seem advising Uhuru Kenyatta to consider keep off from the succession politics where he is seem supporting Raila's Presidency instead of Dp William Ruto.

President Uhuru Kenyatta responded by saying that he is not ashamed of his handshake deal with Raila Odinga as he said that "and I will do so with all others who pursue and cherish peace, have been speaking for longer periods, and loudly at it, but they do not want to acknowledge that my handshake brought peace".

Just In :Azimio Presidential Candidate Raila Odinga to Address the Nation at 2pm