Renowned economist David Ndii has taken to social media to tell off Professor Makau Mutua, for His allegations which were targeting a post by the Nation magazine, claiming that they are intentionally publishing wrong information, to disadvantage the Azimio coalition, considering the number of lawmakers they have gotten in the National Assembly.

Earlier, Makau claimed that Kenyans who are actively following up on the ongoing elections, should not believe the information from the Nation magazine that is going Viral on social media, that purports that the Tangatanga faction has more Mps in Parliament, adding that Raila's side has a total of 147 Mps while Ruto has 131 Mps only who have successfully been elected.

Giving His own reply after seeing the post, Ndii claimed that Azimio Coalition was allegedly formed by President Uhuru Kenyatta, and some of His allies in order to help Him stay in power through the backdoor, since His term was coming to an end soon, something that has not worked since the latest results are a clear indication, that He will hand over power to the incoming administration. 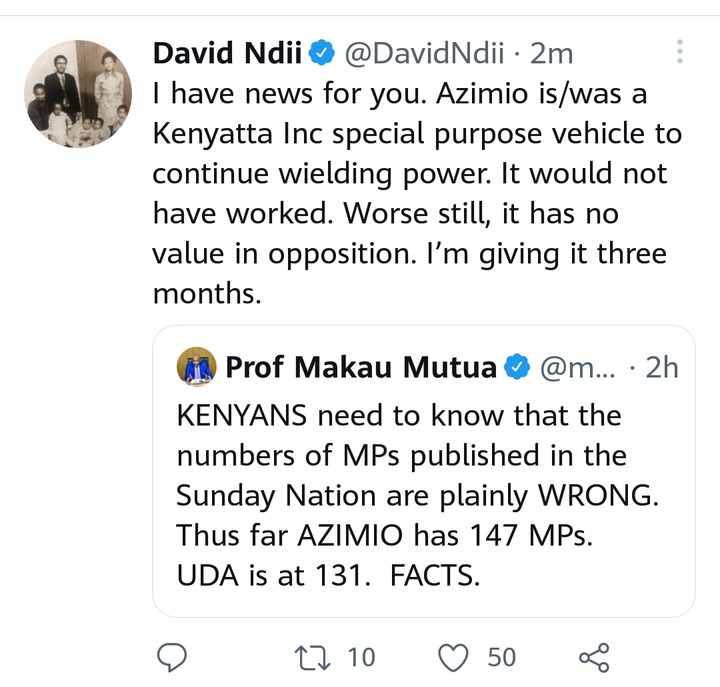 The UDA allied economist however went ahead to claim that Raila's faction, will not survive in the Country for long or even take a stance and return to opposition, to keep the government in Check, urging that He has set period of 3 months to Gauge it and see if they can manage to make moves to establish their way and make their political decisions work.

His claims comes at this time when intelligence reports that has been doing rounds, indicated that Raila who is aging may be seeking to have a working relationship with the coming administration, in order to finish His time in politics and have a smooth transfer to duties of the ODM party, to one of the allied Mps or Senators who will lead the Luo community who will have to have a say in the coming governments.

However even as the final tallies are being done the IEBC and the National Assembly, have not given the final numbers of the elected Mps, in order for Kenyans to sail through the season with the right information.

Makau and Ndii have been actively firing Missiles to each other for long, while defending their factions. Two months ago, they almost clashed on social media following a proposal, that was being discussed by Kenyans concerning the Manifesto of the two political divides.