Ainabkoi Member of parliament Hon William Chepkut has attacked Dp William Ruto and the whole Tribunal that the UDA formed to resolve Nominations issues, saying that their decision to cancel Alfred Keter's Win will be one of the problems that the Party will face in in future.

Chepkut who termed the Party as just a political vehicle with the Tribunal which is allegedly being controlled and outcomes determined by some leaders inside the party against the wish of Kenyans and His supporters will destroy their influence and even impose much other consequences that they never expected in the middle of this party fights.

He revealed that by doing so, they are building Keter's influence from all the angles and He will be a movement in the North Rift in the years to come, something that will enable Him make crucial decisions and orders within the region and be listened to just like the regional Kingpin.

While shading more light on the same, the lawmaker added that Nandi Hills Constituency has had chaos and unrest today during morning Hours, while demanding an explanation on why Keter's Win was taken away from Him, now that the leaders who came for supervision of the nominations have gone silent on the matter. 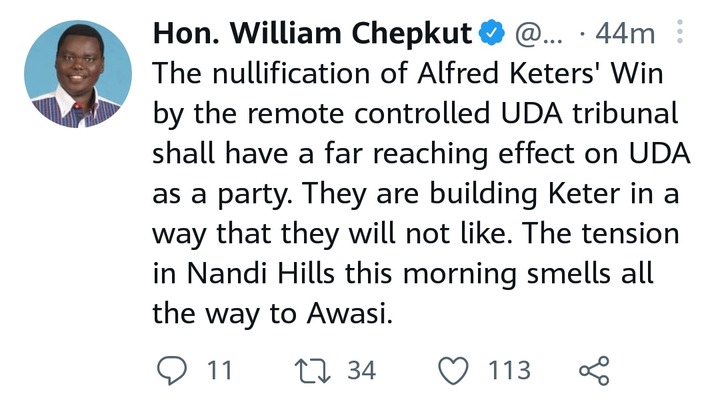 The Tribunal which had Keter and His rival presented to the Party for the dispute to be solved had earlier claimed that the He had lost terribly and He decided to attract much attention from Kenyans since He wants to have sympathy and build His career as the Chief rival in Ruto's backyard.

The Vocal Politician called His supporters at Night two days ago a Hall, while instructing them not to believe in the UDA shenanigans, saying that some officials had decided to block His certificate in Nairobi and groom His opponent for the issuing of the Certificate despite the fact that He won it legitimately.

The nullification comes a time when the Nandi Hills Mp has been attacking the whole UDA team for close to 10 years now, while claiming that their Manifesto and plans for Kenyans are fake since they want to grab power and start to loot from Kenyans Mercilessly, and even continue the legacy of Jubilee government that has had many Kenyans suffer.

Big Blow to 800 Squatters As Court Makes a Powerful Ruling