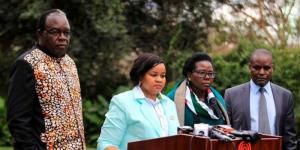 Vice Chairperson Juliana Cherera, and commissioners Irine Masit, Justus Nyangaya, and Francis Wanderi, were accused of attempting to subvert the people's will.

Mutua, however, reiterated that the four were targeted to settle scores as Ruto plans to take control of IEBC ahead of 2027.

"UDA needs to know that if through a kangaroo process in Parliament or without it dismisses and replaces the IEBC four that the 2027 elections, and any by-elections, won’t take place. Period," Makau stated through his social media pages.

Earlier, reports alleged that Raila was worried about the 2027 General Election becoming shambolic over being influenced by Ruto's administration.

Azimio contemplated calling for the return of street protests to keep the government in check.

Odinga termed the tribulations as a witchhunt from the government of the day.

“This probe is politically motivated; it is a continuation of the witch-hunt mission that Ruto is on. We advise the commissioners to boycott it in the interest of constitutionalism and rule of law,” Odinga declared.

He decried that the Ruto administration was eager to replace the four commissioners with those who would help them win the 2027 elections.

However, Ruto's allies maintained that the four IEBC commissioners were reportedly accomplices to a failed coup attempt.

“If they were wise, they ought to have resigned the day the Supreme Court determined the contest as to who between President William Ruto and Raila Odinga won the election.

Ruto also accused Raila of being the sole reason behind the country's problems.

"The lords of impunity, who destroyed oversight institutions using the handshake fraud, should allow Parliament to hold rogue officials who put the nation in danger by subverting the people's democratic will to be held accountable.

"New order is the rule of law and not the wishes of big men," Ruto posted on his social media platforms on Friday, November 25.