Tsunami Is Coming? Junet Mohamed Reveals What Raila Is Plotting On Friday

By @Statistician (self meida writer) | 1 months

The next Kenyan general election is scheduled to take place on 9 August 2022. Voters will elect the President, members of the National Assembly and Senate, county governors and members of the 47 county assemblies.

The political temperature is rising as two flamboyant leaders square off prior to the 2022 elections. Former prime minister Raila Amollo Odinga and William Ruto are the most articulate and persuasive candidate in the run-up. 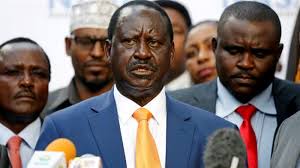 According to the Nation, Suna East member of Parliament and Orange Democratic movement party top ally, Junet Mohamed, has announced a major political event that is scheduled to be released on Friday, July 6th 2021.

According to Junet the ODM coalition is plotting to kick off campaigns on a serious note with a major political event being plotted.

Kenyans should be set for Tsunami that Raila Odinga is currently cooking. This is according to the surfaced video from The Nation that leaked Hon. Junet Mohamed noting that Orange Democratic Movement party will form the next government.

DP Ruto Brings Migori To A Stand Still, See The Love Kenyans Have For Him