Wajackoyah Sends A Shocker To These People

Roots party presidential candidate George Wajackoyah has once again proof to be a no nonsense man as he sends warning to those leaders who will be involved in corruption if he becomes the next president of Kenya.

Wajackoyah has vowed that in his days as president if one will be found guilty on corruption, then he will be given a death sentence. The presidential hopefuls has lamented on how corrupt leaders in Kenya continued with their leadership even after found guilty of corruption.

The Roots party leader has admitted that in his government if he wins then there would be no other punishment rather than to be Killed.Wajackoyah has given examples of countries where corrupt people were being Killed.

Surprisingly the leader has admitted that he will release those people who were involved in petty crimes.

"I will release all prisoners with petty crimes and introduce death penalty for corrupt people.'If you nyonga about 10 of them, there will be no theft"he said. 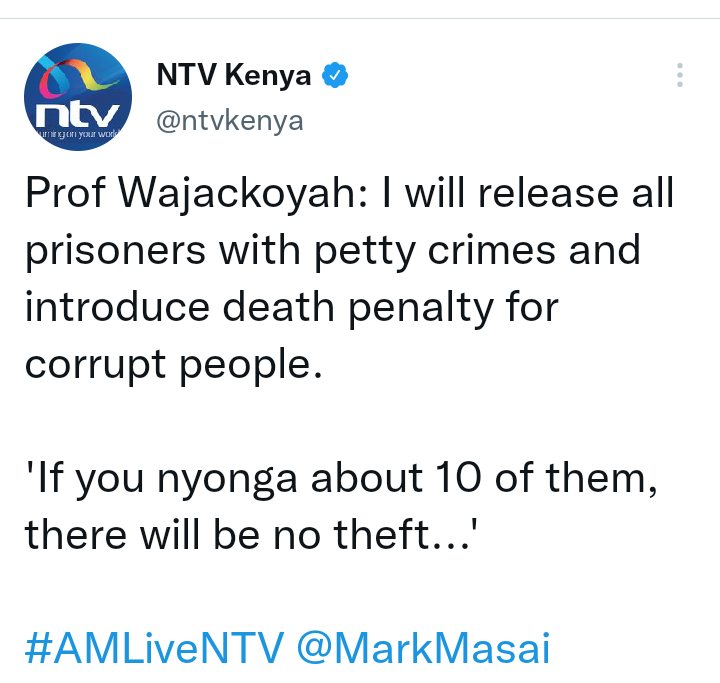 List Of Counties Where DP Ruto is Ahead of Raila

Provisional Presidential Results From Five Counties in Western Region As At 8:15 Am Wednesday

List Of Counties Where Raila Is Leading As Per Now