Azimio la Umoja One Kenya Alliance presidential candidate Raila Odinga has break his silence over the accusations made by his Kenya Kwanza rivals claiming that he, alongside President Uhuru Kenyatta, allegedly changed the ownership of three critical ports to United Arab Emirates. 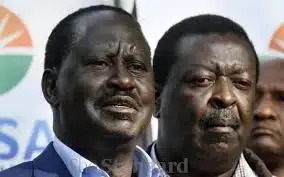 In response to this allegations, Mr Odinga via his Presidential Campaign Secretariat Professor Makau Mutua, refused the accusations saying that despite the March 2018 handshake between Raila and President Kenyatta, he said the latter does not have constitutional powers to make any binding agreement with foreign countries on behalf of Kenya, saying the accusations lodged against him are wild, unfounded and careless.

"Mr Raila Odinga is not in Jubilee government and does not have any legal capacity constitutionally to enter into any official contracts or agreements on behalf of the Kenya."

He also urged Odinga's detractors to stop from making reckless allegations against the Azimio la Umoja one Kenya coalition flagbearer without having enough evidence to substantiate their accusations.

Parliament holds more significant and powerful authorities than the president.