It Will Be A Tough Race, Raila's Chief Campaign Nderitu Promises 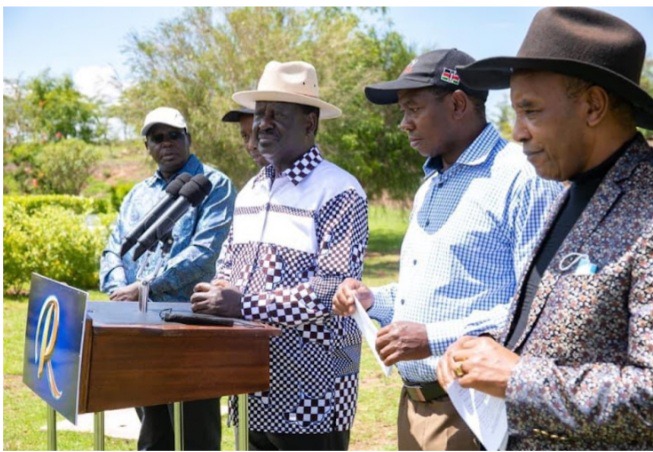 ODM leader Raila Odinga's new electoral think tank promises "a campaign like no other" as the former prime minister prepares to address his first large rally in 2022.

The Star established that the rally will be held in Thika, the heart of President Uhuru Kenyatta's backyard in Kiambu, on Saturday, as handshake troops vie for the lion's share of the coveted Mount Kenya vote. .

In his first media interview, Raila's campaign council chairman Ndiritu Muriithi revealed that he was doing everything he could to defeat Vice President William Ruto and take over the country in the August 9 elections.

“It's a campaign like no other. This is only comparable to the 2002 national Rainbow campaign, ”said the governor of Laikipia.

It is understood that foreign polling experts will join a team of local professionals that Raila has assembled to carry out its campaign.

In 2017, a US-based data company, Aristottle Inc, which worked for Raila, saw its officials dramatically arrested and kicked out by the Jubilee administration.

In an interview with Nam Lolwe FM, Ndiritu, a nephew of retired President Mwai Kibaki, expressed confidence in Raila's landslide victory in the August elections.

He said most regions that were hostile to the ODM boss in previous elections were slowly embracing his candidacy.

"The supporters should feel very encouraged because most of the regions that Raila did not have support are advancing," he said. “Raila's traditional supporters are intact; it has gained many supporters in the northeast, the Rift Valley, especially Nakuru and Laikipia.

He also cited Mount Kenya where he claimed the former prime minister overtook Vice President William Ruto as the most popular candidate.

"I think we have reason to be confident that Raila Odinga will be president of Kenya," he said.

A recent Infotrak poll shows, however, that Ruto remains the most popular candidate in Central with 42 percent against 16 percent for Raila.

According to the new campaign leader, Raila came close to victory in the latest polls without the Kikuyu vote, which he said has changed to a large extent in favor of the former prime minister.

“One of the reasons for our confidence is that Raila Odinga in his previous elections was on the verge of winning without Mount Kenya. As we speak, he is the leading contender for Mount Kenya. I suspect he will get around 60 percent, ”he said.

The governor described his campaign council as "a high-performing team" of imminent people who will win the August victory.

Their main mandate is to give political direction to the secretariat headed by Elizabeth Meyo.

The board is also charged with mobilizing the resources needed to secure a massive war chest to deal with DP Ruto.

The board also includes wealthy billionaires who funded Uhuru's campaigns in 2013 and 2017.

Businessman SK Macharia represents the Mount Kenya Foundation on the board of directors.

The team declared their support for Raila last year.

In the secretariat, the former commissioner of the internal tax department Elizabeth Meyo works with a team of professionals who will be responsible for developing and managing the campaign calendar on a daily basis.

Meyo's secretariat, Nderitu said, is supported by thousands of volunteers from all 47 counties who will be responsible for getting the campaign's message down to the grassroots.

The Star has established that the campaign team has, over the past week, burned midnight oil to establish a campaign timeline for Raila.

On Saturday, the ODM boss will address his first 2022 campaign rally in Thika in Kiambu County.

Speaking on Tuesday when he met young people from Kiambu, Raila called on his supporters to show up at the mega rally that will mark the start of his nationwide engagements.

In Thika, the fourth presidential candidate will popularize his candidacy as well as his political machine for the August elections, the Azimio La Umoja Movement.

“Saturday we are in Thika, we are going to have our first public engagement in 2022 in Thika,” Raila said.

He added: “All roads will lead to Thika. We will talk to the people of Murang'a and Kiambu in Thika.

Raila has not had a major political rally this year. However, he addressed roadside rallies in Nakuru, Kajiado and Kiambu.

In the radio interview, Ndiritu urged his supporters to take advantage of the improved voter registration and register as voters for the August elections.

"I would encourage young people, if you are not a registered voter then take advantage of the mass registration to enlist as a voter and take charge of who will lead Kenya on various fronts," the boss said. from Laikipia.

The Independent Electoral and Boundaries Commission is expected to proceed with the second enhanced voter registration from January 17, the last list exercise before the August elections.

Atwoli's Message To Ruto And His Team