By Red-Envelope-News (self meida writer) | 1 months

It is no longer a secret that President Uhuru Kenyatta and his deputy William Ruto do not get along politically, with the dynamic duo who traversed the country in 2013 and 2017 in less than favorable terms. 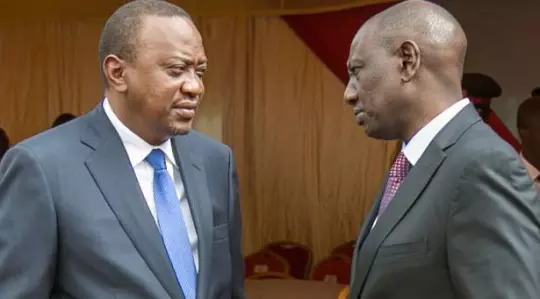 The security detail of Deputy President William Ruto has reportedly been chased away by President Uhuru Kenyatta's camp.

The two teams no longer work together as they used to, and Ruto's security teams are currently barred from mixing with Uhuru's.

The report has piqued the interest of Ruto's supporters. Ruto's camp has spoken out about the reports via Soy constituency member of parliament Caleb Kositany, who is widely regarded as the deputy president's de facto spokesman.

Kositany decried the latest move as evidence that, having finished purging Ruto's allies in government, President Uhuru Kenyatta has turned his attention to Ruto's security detail. He claimed that this proves the ruling Jubilee Party is no longer in power.

"Politicians have been purged, and only the guards remain. Jubilee is collapsing so quickly, "He responded.

President Kenyatta's relationship with his deputy and potential successor, William Ruto, took a turn in early 2018, when the latter struck a deal with opposition leader Raila Odinga as his second and final term came to an end.

Because of the proposed Building Bridges Initiative, William Ruto disagreed with the president. It was transformed from a handshake into a means of bringing Kenyans together, which the deputy president was having none of.

Several political leaders from across the country have expressed interest in succeeding President Uhuru Kenyatta in the coming year.

With alliance formations becoming a hot topic, Mount Kenya Region has a number of leaders hoping to be 'endorsed' by President Kenyatta not only as the region's kingpin, but also as the region's presidential candidate.

The Speaker of the National Assembly, Justin Muturi, was installed as Mt Kenya's Spokesperson a few weeks ago, in a ceremony that elicited mixed reactions from leaders aligned with Uhuru's camp.

Speaking to NTV on Monday evening, Uhuru's cousin Kung'u Muigai argued that the president has yet to say anything about Muturi's coronation, implying that he is not opposed to the move.

Content created and supplied by: Red-Envelope-News (via Opera News )

The Bodies Of The Two Lost Brothers Found In Embu Mortuary