By AbdifatahMohamedMohamud (self meida writer) | 1 months

Former Somali Prime Minister Omar Abdirashid Ali Sharmarke has announced that there is a serious agreement to be signed between Somalia, Ethiopia and Eritrea, which he called for attention. 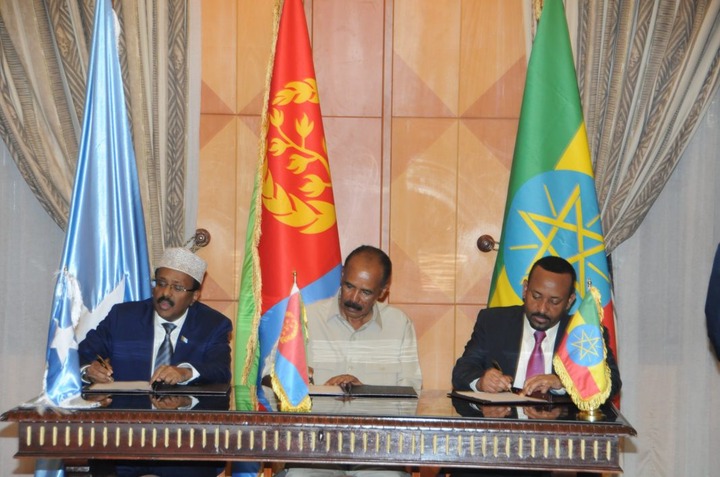 Omar Abdirashid, a senator in the Upper House, tweeted that the security and defense agreement would be signed soon in Addis Ababa.

"The current security agreement between Eritrea, Ethiopia and Somalia could be a serious issue that needs to be addressed. Because of the endless misuse of the security sector, it will be a matter of serious concern, if the outgoing federal government tries to sign such an agreement in Addis Ababa," Omar Abdirashid said.

This comes as Capital Online reported yesterday that the international community is pressuring Farmajo to cancel his trip to Addis Ababa and instead reach an agreement with regional administration leaders in Mogadishu.

Mohamed Farmajo, Isais Afwerki and Abiy Ahmed have become friends and allies since Abiy took power in Ethiopia in April 2018, and critics say they have agreed to work together to govern the three countries.

Afwerki is a dictator who ruled Eritrea for many years, and although Abiy came to power with great ambition, he imprisoned all Oromo rebels, and then waged war on Tigray. Farmajo forcibly overthrew three regional presidents, then appointed three of his supporters, while the fourth, Ahmed Madobe.

The first signs of agreement between the three leaders were seen when Ethiopian forces helped Farmajo oust some regional administration leaders, such as South West and Galmudug, and fail to board a plane to Kismayo. when Ahmed Madobe found out.

Eritrean troops have also helped Abiy Ahmed in the Tigray conflict, where international human rights groups say he has committed atrocities including murder, rape, and torture. Following international pressure, Abiy arrived in Asmara last week and asked Afwerki to withdraw his troops there as soon as possible.

"Please Sell Him He Is Below Our Standards" Man City Fans Angry Over Their Star Player.

"Am Sorry" Manchester City Star Apologise After Missing A Penalty Against Chelsea.