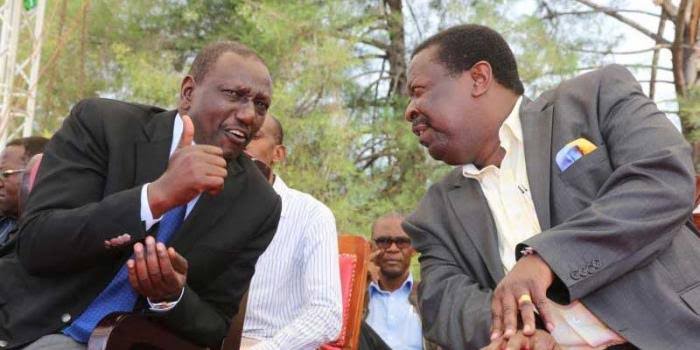 Recently, reports emerged that parties under the Kenya Kwanza coalition were in talks to merge and form one mega party in the name of UDA. Already, Moses Kuria ( Chama Cha Kazi ) has made public his plans to fold the party and merge Ruto's UDA.

Though Mudavadi has not pronounced himself on the matter, he has already received warning from the Member of Parliament representing residents of Embakasi North Constituency James Gakuya of dire consequences should he follow Moses Kuria's path.

According to the MP who was speaking to TV 47, a merger between UDA and ANC will be a 'political suicide '. "Mudavadi has attempted many political suicides, but I'd he attempts to fold his party and join UDA,it will be the end of his political career," said Gakuya.

Though reports indicate that talks are underway to merge Kenya Kwanza parties, other parties like Irungu Nayakera's Farmer's Party have expressed unwillingness to fold. Chances of ANC merging with UDA are also minimal.