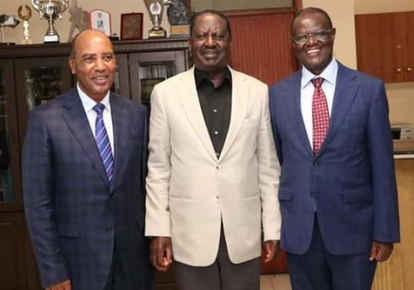 Meru Governor Kiraitu Murungi has lost his first election after 30 years (since 1992), to an independent candidate and who is the current Woman Representative of the county, Kawira Mwangaza.

Murungi has won seven consecutive elections, six being for parliamentary positions, while one being a gubernatorial post, all which he vied on seven different political parties.

During his campaigns, Murungi was urging the residents not to humiliate him at the ballot, and it must have been his wildest dream that he would have lost the 2022 polls, since he was confident of clinching the seat.

Mwangaza garnered 209,158 votes, while Deputy President William Ruto's ally and who was contesting under the United Democratic Alliance Senator Mithika Linturi came second with 183,859 while Murungi came third with 110,850 votes.

Murungi, an Harvard educated Lawyer is among the longest serving elected leaders in Kenya, since his win as Imenti South MP in 1992.

He was defending his seas under his party, Devolution Party of Kenya better known as Bus Party.

In 2017, Murungi floored his then main rival, Agriculture Cabinet Secretary Peter Munya after garnering 281,737 votes under Jubilee party against Munya's 232,569under the Party of National Unity, PNU.

Munya early this year agreed to step down in favour of Murungi after securing a deal with the Azimio La Umoja One Kenya Alliance which fronted the ODM party leader Raila Odinga as the 2022 presidential candidate.

3 Ways To Make A Woman Want You More

So sad the deputy president is drawn into a mourning mood after the lose of his elder brother.

Atwoli Reacts Over MPs Plot To Clip The Powers Of SRC, Reveals What The Commission Should Do And Why

Monthly Salary of Doctors, Judges and Lawyers in Kenya

'' MPs Salaries and Allowances Must be Increased'' Atwoli Explains