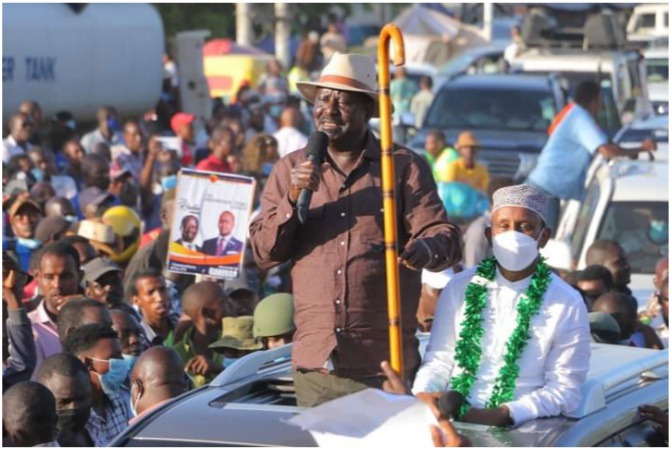 The Star has established that Raila is starting an elaborate tour of Meru, Embu and Tharaka Nithi counties from Monday.

The head of the ODM will be received by the Governor of Meru Kiraitu Murungi, Martin Wambora of Embu who is also Chairman of the Board of Governors as well as Muthomi Njuki of Tharaka Nithi.

Insiders have said Agriculture Cabinet Secretary Peter Munya, a close ally of Raila, may skip the visit, due to his political differences with Kiraitu.

The new realignments could shake up Vice President William Ruto and Speaker of the National Assembly Justin Muturi who are also eyeing the region's votes.

According to the plan, Raila will make stops in Maua, Laare and Maili Tatu on Monday and end the day with a political rally in the town of Meru.

On Tuesday, the former Prime Minister will stop at Nkubu, then travel to Chuka for Mount Kenya East "Azimio La Umoja".

This meeting would be hosted by Njuki who was initially seen to revolve around Ruto.

After the meeting, the former prime minister is expected to address a series of meetings in Runyenjes, in the town of Embu, and is tentatively scheduled for a dinner hosted by Governor Wambora.

“We welcome him [Raila] with the governors. We expect a warm welcome from the former Prime Minister. He hasn't been here for a while, ”Igembe North MP Maoka Maore, who is part of the coordination team, told The Star.

In an interview with the Star, Wambora confirmed that he would indeed join the former prime minister on Tuesday, citing a COG engagement on Monday.

“I had organized a meeting of the Board of Governors. I will join the team on Tuesday in Chuka and welcome the Prime Minister in Embu, ”confirmed Wambora.

So far Raila has the support of almost 26 governors across the country against Ruto's 10. The political position of many other governors remains unknown.

On Sunday, Wambora said he had advised the Raila team to hire the governors, describing them as "stable and reliable".

“Once we [governors] support, we don't look back. That was my advice even to the president and Raila so we had to take the governors' route. They are stable, they are reliable, ”the head of Embu County told The Star.

“In the past, Baba did not call any audiences at Central, but now he has an audience. It's a big plus, ”Kega said.

“One thing he accomplished was to step into the mountain that was seen as someone else's. We are doing extremely well. Personally, I am happy. I am on the ground and I know that Raila will be able to get the mountain, ”added the chairman of the budget committee.

He said polls on Ruto's fortune were dropping, adding that this had given their campaign new momentum.

He should go to Ukambani after Mount Kenya East, then circle Mount Kenya West again before Azimio la Umoja's final meeting in Nairobi.

In a preview of what is expected at Monday's meeting, lawyer Mugambi Imanyara, a close ally of Kiraitu, said they would use the meeting to listen to Raila's agenda.

"I don't think tomorrow is a day of approval but a day to hear what he [Raila] has to offer our region if we were to support him to become president in 2022. This is a serious conversation for us. that we have to participate, ”said Imanyara.

However, he said, Raila is the most experienced and has a good track record of serving the public for many years. He said Raila was at the forefront of fighting for reforms and democracy in the country… including the BBI with which we expect him to continue after 2022, ”said Imanyara.

He is the new secretary general of the Devolution Empowerment Party, a new organization associated with Kiraitu and a section of the bigwigs of Mt Kenya East.

“We would also love his commitment to whether he will pursue this BBI dream. We want the BBI to be implemented in a short period after 2022, ”added Imanyara.

However, it emerged that Munya whose PNU is on the verge of making a political pact with ODM could skip the tour.

EALA MP Mpuru Aburi, a close CS ally, said they might not want to share a podium with Kiraitu.

He said they would organize their own meeting to welcome Raila.

“We have no problem with Raila, but where Kiraitu is, we may not go. We will brake and plan our own tour for Raila. We do not want to cause shameful scenes, ”said the former MP.

On Saturday, supporters of governor Isiolo Mohamed Kuti clashed with those of his predecessor Godana Doyo.

Aburi, who is the leader of the NOPEU party, said: "Because Kiraitu is the one planning this, there is no point in spoiling the Raila event."

Aburi said that despite the prevailing events, Munya was in the camp of the ODM chief 100%, adding that only the CS had campaigned for Raila in the region.

“We explained the same to Raila. We don't want to shame and discredit the meeting. PNU and NOPEU will not participate in the Raila meeting. We will plan ours since it is Kiraitu's.