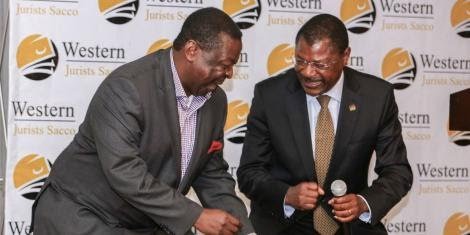 One Kenya Alliance (OKA) seems to have reached a dead end following the major announcement by one of the co- principles Musalia Mudavadi who is the leader of Amani National Congress (ANC) Party.

According to a report by the standard media group, three key reasons have been sidelined as to why OKA Coalition has split. According to the source, the fallout started in December last year and in early January when the Principles began pooling in different directions.

In the Naivasha meeting ANC failed to attend the meeting because they felt their leader Musalia Mudavadi was being dragged to the power negotiating table without allowing his party to formally endorse him to run for presidency while other partners had already held their NDC meetings.

The formation of DAPK Party is the second reason. According to ANC and Ford Kenya it was part of the wider scheme by the system to deflect the two parties.

And lastly, with KANU and wiper having a life coalition agreement with the ruling jubilee party it was difficult to ascertain their commitment to the OKA Alliance since they were enjoying political benefits just like ODM unlike ANC and Ford Kenya that were in the cold literally.

COTU Atwoli Leaves Crowd In Stitches After Saying This About Ruto