Powerful Kisumu Politician Who Has Been Raila's Political Rock For Decades 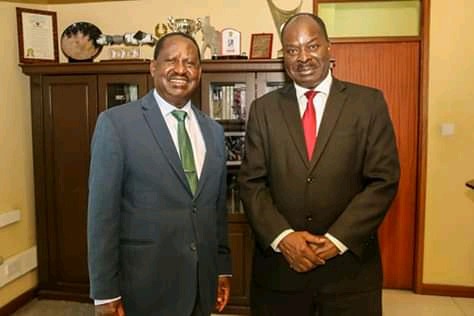 In his decades-long political career, ODM leader Raila Odinga has made many political friends and enemies alike.

Seen by many as one of the most consequential politicians Kenya has ever produced, Raila has heavily relied on trusted allies to springboard his political ambitions.

One of those trusted allies is former Nyakach MP Peter Odoyo.

Odoyo has been one of Raila's most right hand men during the early stages of Raila's political career.

At the time Raila ditched the controversy-dogged Ford Kenya to form the National Development Party, Odoyo was one of the first people to be recruited into the new outfit.

NDP would later go on to make a major impact in Nyanza during the 1997 election with Odoyo becoming one of its first MPs in the region.

Even after the KANU- NDP merger which brought together President Daniel Arap Moi and Raila, Odoyo went on to serve in the Nyayo government.

After Narc took over leadership in 2002, Odoyo was once again on the right side of history and served as assistant minister in the President Mwai Kibaki regime.

Though Odoyo lost his Nyakach MP seat in 2007, he remained Raila's trusted ally.

In 2020, he made a comeback after many years in the cold when he was appointed by President Uhuru Kenyatta as Chief Administrative Secretary in the Ministry of Defence. The appointment had much to do with handshake politics.