Chebukati Breathes Fire After This Happened In Juja By Election, Sends This Message To Kenyans

By NatashaNews (self meida writer) | 26 days 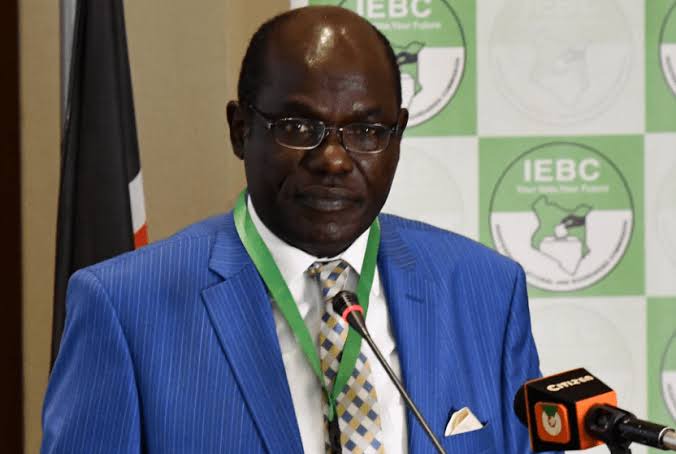 Independent Electral commission chairman Mr Wafula chebukati broke his silence after Chaos was witnessed in Juja by election. While taking on official commission Twitter handle. Angry Chebukati fired salvos at Kiambu governor Nyoro accusing him of leading ateam of goons that stormed the tallying center, forcing the commission to suspend the process.

Governor Nyoro stromed Mangu High school social Hall which was acting as a final tallying center accompanied by his allies. He claimed that some of the ballot papers were thrown in different locations. Ballots that belonged to his ally who was fielded by jubilee party.

Several Kenyans have condemned the way there by elections have created tension in the country ahead of general election which is just one year Away. Some are calling on leaders to restrain their supporters and encourage them not to engage in viloence.

"Total disrespect to the will of the people their sovereign power. @IEBCKenya hope you will take actions against the governor." Posted David.

"Now we know the instigators of violence,They keep reminding us of 2007,but behind the scenes they are the once crying wolf." Posted Ken.

"Our institutions are become more stronger and independent.. calling a spade by its...Nyoro led the Hooligans to disrupt the counting of votes in Juja. Shame on you Governor Nyoro" posted Debra.

"This government is a criminal enterprise, you heard from its top advisor Mutahi. The will of the people of Juja must be respected." Posted James.

"Election is what disunite us. So BBI was to touch on Unity during and immediately after elections from prefix pages to the Appendices to the further end." Posted Moses.

"Thank you IEBC for saying it without mincing words. The disruption squarely comes from Deep State Agent and the galactic margin by Hustler Nation can't be TharakaNithied courtesy of your standing like High Courts to ensure transparency and fairness a reflection of the people will" posted James.