The duo whose friendship reportedly turned sour after the 2018 handshake between the president and the former Prime Minister Raila Odinga shared a light moment and could be seeing enjoying the moment.

At one time even the DP left his seat and had a chat with the president when the guests were being entertained.

Speaking on Citizen TV, Atwoli claimed that the president 'does not talk' but act unlike his father Mzee Jomo Kenyatta, and that the duo had to have a good show since they were in a public and during a national event.

"You can't see the president talking, he is silent fellow, you will feel his punch on your shoulder. Don't believe in his body language," said Atwoli.

He went on to state that the president is young to retire, and that he can rest after the second term ends and make a debut after either five or ten years.

"According to the Constitution he will go home, but he can rest for few years and come back," added Atwoli. 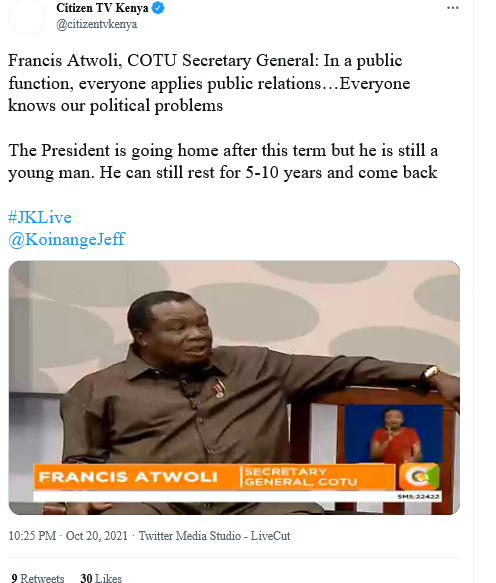