By Godiva (self media writer) | 1 month ago 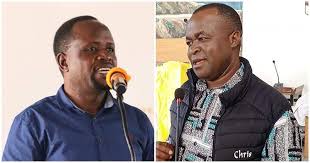 The results of the general elections for governor and senator that were held on Tuesday, August 9, have already been made public, according to sonkonews. The majority of Kenyans, if not all of them, are aware of their new MPs, MCAs, and women representatives despite the fact that the official results of the presidential election have not yet been disclosed.

One of the many Kenyans who attempted to run for governor but were unsuccessful was Kwanza.

Former county commissioner George Natembeya of DAP-K defeated Kiminini MP Chris Wamalwa of Ford Kenya in the Trans Nzoia election. Later, Wamalwa expressed respect for his opponent and accepted defeat. He thanked the Kiminini people for letting him represent them as their MP.

Greetings, @Natembeya Gon I thanked George Natembeya for his help. I wish him the very best. He tweeted that he had a restful night of sleep.

Paul Otuoma of the ODM defeated John Bunyasi of the ANC to become the next governor of Busia. On the other hand, Bunyasi has disputed the results and announced that he will sue as a result of substantial vote irregularities in multiple seats.

The current governor of the district, Wilber Ottichillo, defeated Alfred Agoi of the ANC.

Johnson Muthama, the chairman of the UDA, came in last place for Machakos governor. The winning competitor was Wavinya Ndeti of the Wiper party.

Mark Rabudi, a UDA candidate for governor of Homa Bay, came in last with 1,244 votes. Gladys Wanga won the contest with 244,059 votes. Evans Kidero, a former governor of Nairobi and independent candidate, finished in second with 152,182 votes.

Rebecca Maria of the UDA finished last in the race for governor of Migori despite getting 6,563 votes. The race's winner was Ochillo Ayacko.

Content created and supplied by: Godiva (via Opera News )

"Next Month Azimio Will Not be The Majority" Wiper MP Says, Criticizes Colleague MPs Who Joined KKA

Why President Ruto Retained Simon Chelugui in His Cabinet, Gave Him a New Ministry

'It'll be a Sad, Dark Day if Azimio are given Majority' Didmus Tells Speaker Wetangula

"I Cannot be Caged in Azimio, Speaker Protect Me From The Abusive Marriage" Kamket Says He's in KKA

Sad News For Manchester United Fans As Their Player Is Set To Leave In January.

Gachagua To Ruto: This Is The Real Reason Why Mt Kenya Residents Voted For You