Possible Reason For His Defection Why It Is Not A Big Loss To Amani National Congress Party.

By WiseBoy_InfoNews (self media writer) | 3 months ago

My dear reader, thank you for choosing my article, please also make an initiative of following me for more of this. 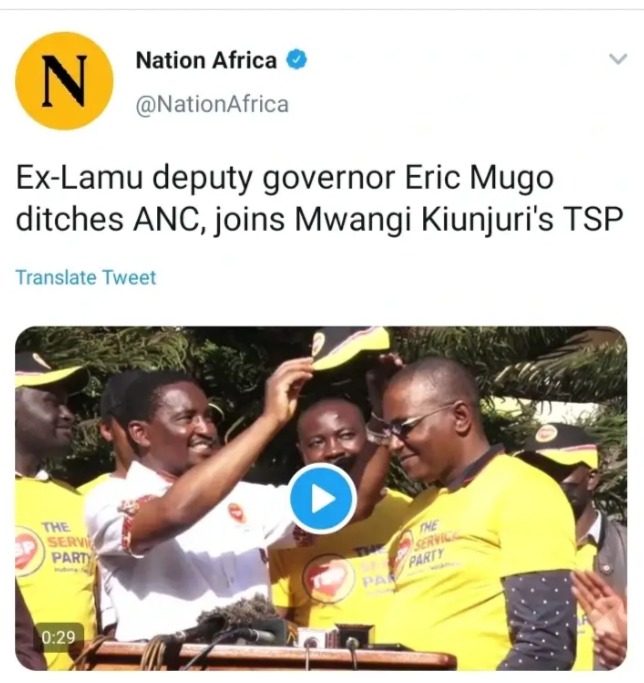 Yesterday the Nation Africa reported of an Amani National Congress party key individual who defected from the party and joined the Kiunjuri-led, The Service Party(TSP). The said person, as seen via Nation Africa tweet, the individual was former Lamu Deputy governor Eric Mugo. The politician deputized Issa Timamy, a one-term governor, who unsuccessfully defended his seat in the 2017 general elections. Though his reason for defection was not revealed, in this article, I give the possible reason and why his defection is not a big loss to the party as long as its popularity in the Coast region is concerned.

In my view, Honourable Mugo was running behind Governor Issa Timamy in an Amani National Congress party ticket both in 2013 and 2017 elections on the hope of succeeding the governor automatically. His hope was that by supporting the governor in both of his two terms, the governor and the party would return the favour by lobbying for his election come 2022 thus winning the seat very easily. However, After Timamy failed to retain the seat, and his decision to give it another try in 2022, would complicate Hon. Mugo's matrix since he is unlikely to get the party's ticket. Thus for him to avoid running as an independent candidate, he had to seek refuge in another political house, which has turned out to be The Service Party.

The bigger concern here however is, is Mugo's defection got a big impact on Mudavadi-led Amani National Congress party in the coast region as some pundits put it? The answer is a big no, Why? Well, Amani National Congress party still has two strong stalwarts in the coast region, whose combined efforts make them far much stronger than Mugo. The two have so much influence in the region that even an effort from a single of them still supersedes Mugo's influence. Below is the candid information about the two;Kassim Sawe Tandaza, Member of Parliament Matuga Constituency, Kwale and Issa Timamy, former Lamu governor who is also vying in 2022.

He is the eldest son of the late Ali Mwapore Sawa and Binti Omar Kadide of Tsimba Golini. Tandaza is married and has children.

In 1987, Kassim Tandaza went to University of Nairobi to pursue Bachelor in Civil Engineering where he graduated in 1990. From 2010 to 2012, Kassim joined Kenyatta University to take a Masters in Business Administration and later in 2014, moved to Jomo kenyatta University of Agriculture and Technology to earn a PhD in Strategic Management.

In 1990, Tandaza got a job at Mombasa polytechnic as an assistant lecturer working there till 1995. Since 1995 he is working at Tandaza Contractors as a director. In 2017, he became a Member of Parliament for Matuga Constituency under the Amani National Congress party.

He trained at the University of of Nairobi as a lawyer. Timamy was born in 1959 in Lamu, where he also grew up. He went to Lamu and Sacred Heart Primary Schools before joining Allidina Visram Highschool in Mombasa.

Timamy worked for many years as company secretary and director at Sameer Group of Companies in Nairobi. In 2005, he was appointed chairman of the board of directors of the National Museums of Kenya, from where he resigned in 2012 to venture into politics.

He still runs his Law Firm Timamy and Company Advocates in Mombasa and specializes in commercial law. A father of five, Timamy is married to Doctor Hajara El-Busaidy, daughter to prominent scholar Professor Abdulgafur El-Busaidy.

In the 2013 general elections, Timamy vied in the gubernatorial elections, winning as governor of Lamu, alongside Deputy governor Eric Kinyua Mugo. He was elected on a United Democratic Forum (UDF) ticket.

In his regime, the former governor unveiled a Hindi Orphanage centre built at cost of 17 million Kenya shillings. The governor thanked Al Furqan Charitable Society in Turkey for the centre. The centre will admit more than 200 orphans and other children from destitute families within the county.

Al-kheir village foundation, an invited friend and partner of the governor, is a humanitarian organization based in the United Kingdom. The foundation is building two-bedroom houses for villagers in Bahamisi village, Pate Island in Lamu County. From Bahamisi village, Al-kheir foundation will extend the 30 million project to more villages.

The residents live in poor conditions with no water, health services, education nor food. They have no beds and their houses are leaking. The founder and president of the foundation, Imam Qasim Ahmad, said they will build 28 houses and furnish them. Ahmad said they will also set up a mosque, a health centre and an Early Childhood Education centre.

The former governor has also branded Lamu as an Island of festivals. This is aimed at reviving the tourism industry and since then, there has been an increase of visitors through airport arrivals.

Research conducted by the Department of Humanity, University of Nairobi on accountability and transparency in devolved units ranked the governor among the Top Five Governors in the country that were likely to be re-elected because of his development record. This proved to be wrong since Timamy lost his seat in the 2017 polls. However, Timamy is still an ardent member of Amani National Congress party and will be using the party's ticket to run for the gubernatorial position next year.

With Issa Timamy and Kassim Tandaza still on Mudavadi's side, Amani National Congress party still has a significant command of the Coast region.

Thank you for your reading, please drop your opinions at the comment section below.