By Ochiengqueen (self media writer) | 4 months ago 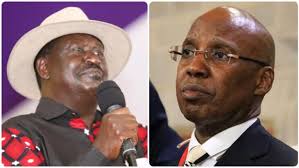 Businessman Jimmy Wanjigi has finally talked for the first time since his arrest. Yesternight saw business Jimmy Wanjigi being arrested by what is said to be by some officers from the Directorate of Criminal Investigation.

Sources alledged that Wanjigi had been arrested in what is related to his bid to contest for the presidential seat through the Orange Democratic Movement Party.

While speaking in a live interview with NTV Kenya, Wanjigi has revealed that people who look like police broke into his gate and arrested him for what he doesn't knows.

Wanjigi Speaks:"It’s a siege. People who like police, dressed in full gear broke my gate and said they want me to go and make a statement but didn’t say about what" - Wanjigi accuses Raila Odinga of betrayal.

Martha Karua Brings Mathira And Nyeri to a Standstill