By LarryKatana (self meida writer) | 6 days 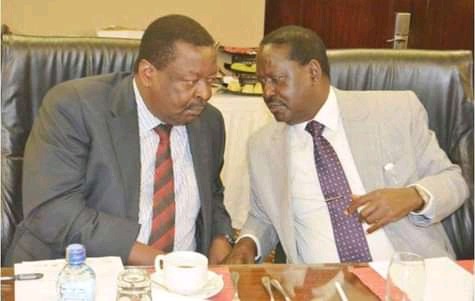 It is becoming increasingly clear that Amani National Congress leader Musalia Mudavadi will be in the presidential ballot box come the 2022 general election.

After his failed State House bid in 2013, the former Vice President is now angling to succeed President Uhuru Kenyatta, the man he had deputized during the 2002 presidential race.

Now as a key member of the One Kenya Alliance that also brings in Wiper boss Kalonzo Mudavadi, Bungoma Senator Moses Wetangula and KANU chairman Gideon Moi, Mudavadi is keen to fly the coalition's flag.

If Mudavadi manages to win the battle to fly the OKA ticket come the 2022 poll, the ANC leader is most likely going to face-off with Deputy President William Ruto in the State House race.

Amid reports that the OKA alliance has the backing of the President, then Mudavadi stands a realistic chance to succeed Uhuru by thrashing Ruto in the presidential contest.

If he plays his cards well, Mudavadi can surely become Kenya's fifth President. But what exactly should he do to win the presidency?

As far as the 2022 presidential election is concerned, the ODM leader Raila Odinga factor will always be key.

What role is Raila going to play in the 2022 general election?

Politically speaking, Mudavadi is avery weak politician. On his own, the ANC leader cannot win the presidency especially if he is going to run against someone like Ruto. As such, with this reality in mind, he needs the backing of someone like Raila.

And amid reports that the ANC leader has taken a hardline stance against Raila if he the former Prime Minister is to join the One Kenya Alliance, then political compromises could be made.

Is there a possibility that Raila can be allowed to join the OKA coalition on condition that he plays second fiddle to the man from Vihiga?

By playing second fiddle to Mudavadi in the State House race, the "Railaphobia" in Mount Kenya region could suddenly disappear.

And with Ruto heavily relying on Mount Kenya support to win the presidency, Mudavadi is most likely going to run away with the vote.

On his own, Raila enjoys a huge following across the country. His supporters will automatically back Mudavadi if he is to deputize the former Vice President.

In the likely event that Raila and Mudavadi strike this kind of an arrangement, then Ruto stands no chance in the 2022 State House contest.