By Ckibiba (self media writer) | 5 months ago 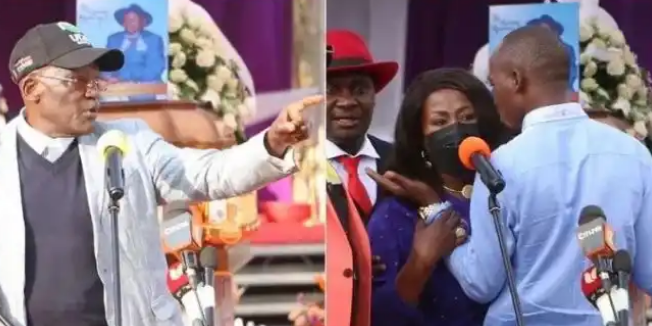 The two leaders confronted each other during the burial of burial of Mzee James Muthama, the father of Ulbanus Muthama, who contested in the Machakos Senatorial by-election on a UDA ticket but lost to Kavindu Muthama, the former wife of Johnstone Muthama.

While addressing the mourners, Wavinya urged the region to rally behind One Kenya Alliance (OKA) in which former Vice President and Wiper party leader, Kalonzo Musyoka, is a co-principal to ensure that they are in power in 2022.

She further castigated UDA allies, Muthama and the MPs Vincent Musyoka and Victor Munyaka, for supporting Deputy President William Ruto, instead of Kalonzo for the President Uhuru Kenyatta’s succession race.

“We are going into the 2022 General Election and there are people who are generating a lot of heat. Kidole moja hakiwezi kumuua chawa (One finger cannot killed a louse). Those criticising OKA’s unity are the enemy of progress in Kenya,” Wavinya stated.

“We must be united as we all need each other. You cannot claim that you will stand on your own. For us the Kamba, we shall stand with our own,” Wavinya said.

However, Mwala lawmaker, Vincent Musyoka who is an ally of DP Ruto lashed out at the Wavinya’s argument claiming that Kalonzo was an underdog in the 2022 Presidential race.

His unending attack on Wiper party leader forced the CAS to take to the podium to defend Kalonzo which led to an altercation between the two leaders.

“We want peace. Let us discuss peace at this burial,” Wavinya stated as she attempted to grab the microphone forcing the organisers to intervene and contain the situation.

The UDA party Chairperson and former Machakos Senator, Johnstone Muthama heightened the tensions at the funeral by accusing the Wiper leaders of worshiping Kalonzo.

“Let someone answer back and I will come where they are and face you. Answer me and see,” a visibly angry Muthama dared, wagging his finger at the other leaders.