By Desert~rat (self media writer) | 1 month ago

Political temperatures of some Suna East constituency residents have gone through the roof after they accused their area MP honourable Junet Mohamed of trying to bribe voters ahead of the August 9 polls. 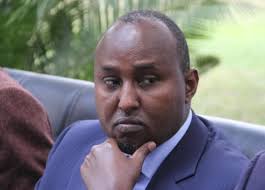 According to reliable sources, honourable Junet has been using government's relief food to get an edge over his opponents something that they have termed as "election malpractice" .

It is alleged that Junet's campaign agents have been distributing the relief food to the residents with fake allegations that the food was donated by Mr Junet.

To make the matters worse, drama ensued yesterday in the afternoon after residents of Kakrao ward fought over the food rations that were being donated and that prompted police officers to intervene.

During the fight, it was reported that two people were seriously injured, while several bags of rice and beans were scattered on the ground as residents tried to compete for the small rations

According to Mr Junet's main challengers, they now want the IEBC to treat that as an electoral offence claiming that he has been doing that with an ill intention of bribing voters and that his donations are a “mockery” for his failure to offer substantial development in his two terms as MP.

Raila Or Ruto? Latest Provisional Results As At 9:40AM Shows Who Is Leading Between Ruto And Raila

R. Valley Politician Reveals What Azimio Team Has Managed to do, Alleges That Raila Votes are Intact

IEBC: Latest Updated Verified Presidential Results As At 9:40AM

As of Sunday at 9:30am, the most recent provincial presidential results.