Kenya President Uhuru Kenyatta were among the global leaders believed to have secret offshore accounts hiding millions of shillings.

Mr Kenyatta and six members of his family have been linked to 13 offshore companies.

He however, said he would "respond comprehensively" to the leak once he returned from a state visit abroad.

ODM leader Raila Odinga came out and broke his silence over the saga. 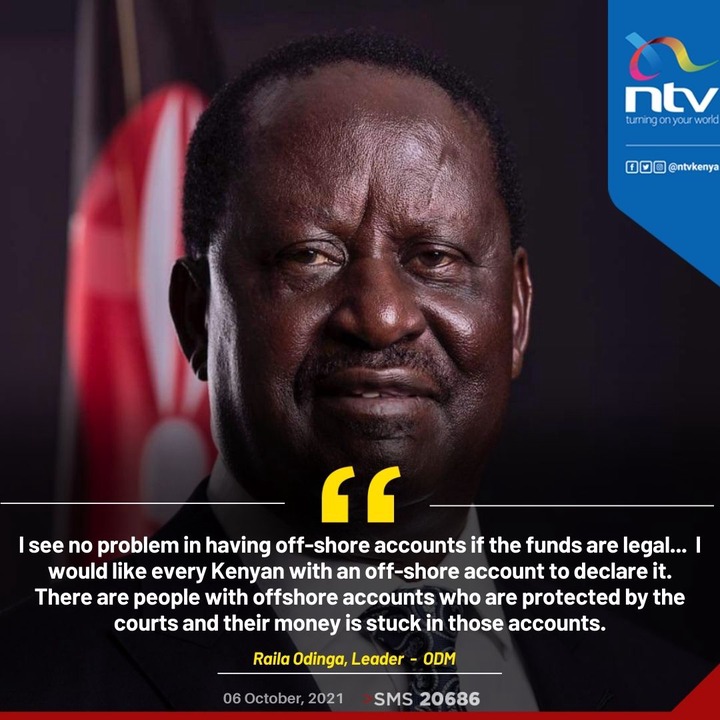 However, this was not taken with ease with Kenyans as most condemn him in supporting the saga.

"Raila is not only a state project but also failed one having been rejected by the people including Mt Kenya, despite all the stagemanaged stopovers where hundreds of people were paid to attend," @GunnerAfrican said.

David said that when Odinga was in opposition government was brought to check.

"We miss your days in the opposition when you used to call out things as they are. Nowadays you just want to remain in the good books of the your handshake partner,"David Kihara said.

"This mzee is foreign to basic economics of injection and leakages,,that money was generated in kenyan economy and leaked to overseas economies,,had it been injected back to this economy in investment its multiplier effect would generate millions of jobs," Evans Kiplangat said.

"Every political family in Kenya has (a lawyer) an offshore account...I hope his (even though he is listed in the UK Registry as a former director-go check), and those of Moi are leaked. Neok said.

"I can't imagine if DP had been mentioned in the list. Raila Uhuru and their proponents would have rushed to courts. They would have called him all names. But since it is the hand shake brother everything is okay," Isaac the Great said

"That is not morally right .those in diaspora to invest at home and grow Kenya economy a. The leader is telling us he wants to be president of Republic of Kenya and says not a problem people keeping offshore accounts, you cant trust our institution in our country," Edward Kiema said.