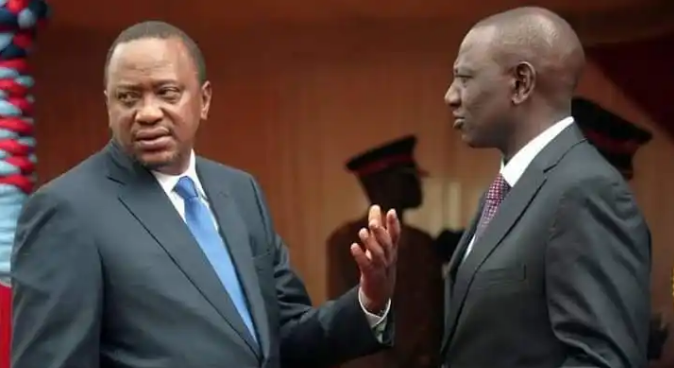 President Uhuru Kenyatta is not an ordinary person to the Mt Kenya community.

President Uhuru is a symbol of freedom struggle and eventual defeat of colonialism in Kenya by the Mau Mau warriors.

His conception and birth have serious political symbolism and trends to the community.

His birth ushered in a rebirth of the community and they have looked upon him for his leadership in and out of crisis.

Former transport minister the late John Michuki declared that Uhuru was the unchallenged community leader and that his word was law to the community.

He said for the mount Kenya, Uhuru was the one with the onus to give them political direction.

Ahead of 2013 presidential election,. Uhuru went back to his backyard and declared Prime Minister Raila Odinga persona non granta in the region’s politics.

Uhuru and Raila were then engaged in bitter exchanges.

Uhuru word became law and Raila became a total stranger to the community that had earlier called him Njamba for delivering presidency to them.

Ruto and his allies have lately been engaged in bitter tirade towards president Uhuru.

Ruto had gained prominent in the region and was becoming the darling of the voters.

But the decision of President Uhuru to back Raila presidential bid is likely to lock him out of the vote rich region.

The recent declaration by Meru governor Kiraitu Murungi that they will make Raila president is just a tip if iceberg of ongoing political machination.

Kiraitu revealed that they demonised Raila to win presidency for Kibaki and Uhuru and that infact Raila is a clean person and trustable.

President Uhuru word to the community can be said law unto itself and Ruto may find the going very rough with obstacles every where. Already Raila acceptance in the region is on a steady rise.

"I Have No Experience With Prostitutes Unlike Your Many Years With Them" City Lawyers Clash Online.

New Alliance in the Offing? Anxiety High Ahead of 2022 as Details of Murathe's Secret Meeting Leaked