Kenya Kwanza politician and Bungoma senator has revealed that he has instructed top city lawyer Ahmednassir Abdulahi also known as Grand Mullah to take legal action against some ODM politicians.This comes a day after the ODM politicians led by ODM director of Communications Junet Mohammed linkked Moses Wetangula to have been part of a scheme with a compnay that was awarded tenders to print ballot papers for the electoral commision IEBC.

"I have instructed SC Ahmednasir aka “The Mullah” to take legal action against ODM desperadoes to stop their reckless inanity against Wetangula and Kenya Kwanza. Watajua hawajui," Wetangula revealed.

Wetangula has again gone ahead to accuse ODM presidential candidate Raila saying that for all elections he has contested he has a history of pointing fingers at the electoral body who is the election referee.He made reference of the 2017 election where when the first round election results were cancelled,he did not participate in the re-run but he just shouted and walked away.He also accused him of boycotting the 2017 repeat elections and that he is now making lame grievances but the election would still be held anyway.

"Political archives show there is no election the ODM candidate has contested without irritatingly shouting against the referee. Even when Supreme Court handed him a second chance, he shouted at IEBC and walked off.After the Supreme Court ruling Raila boycotted the elections citing unsubstantiated grievances against iebc. He is at it again but the elections will be held anyway," he said. 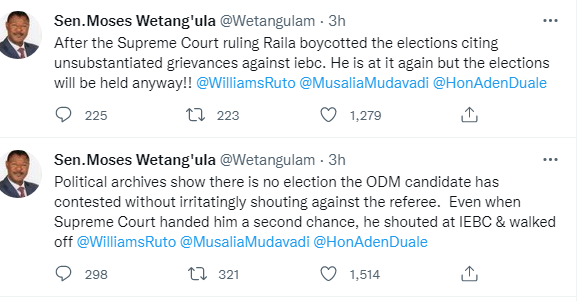 "I didn't say that I will retire" Atwoli response to Itumbi allegations.

Makau Mutua Reveals Why They Lost Election To Ruto