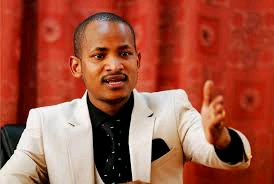 Paul Ongili Owino, also known as Babu Owino, is a Kenyan politician. He was born on October 1989 at Kondele in Kisumu County. He was elected to join the National Assembly as the Member of Parliament for Embakasi East Constituency during the 2017 general elections through the Orange Democratic Movement (ODM). He gained media recognition as the chairperson of Students Organisation of Nairobi University.

As the country prepares itself for the forthcoming general elections come next year, the Independent Electoral and Boundaries Commission has been under pressure from from ODM especially its Chairperson Wafula Chebukati.

According to a tweet by Babu Owino, the angry Babu Owino insists that Chebukati must be removed from the IEBC as soon as possible.

"Chebukati must be removed from IEBC as soon as possible.When you eat with the devil in the dark you must use a long folk." Tweeted by Hon. Babu Owino.

Content created and supplied by: ibramo02 (via Opera News )