The DCI director general George Kinoti has resigned from his position after president William Ruto released the names of the people that will serve in his cabinet. In a press conference on Tuesday Ruto named the cabinet secretaries that he has selected to serve in his government. As he was announcing this Ruto revealed that he had received a letter of resignation from Kinoti who has been serving as the Director General of DCI. 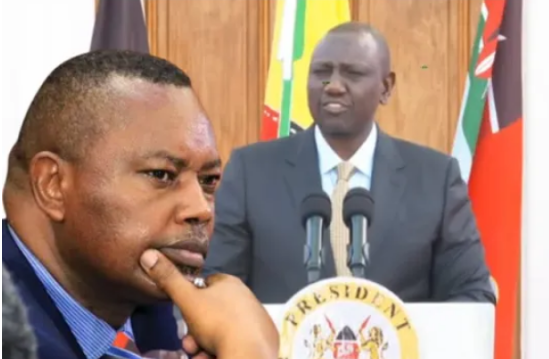 Ruto did not however state the reason why Kinoti was resigning from his position. He said that he had shared the letter with the National Police Service so that they can start looking for a perfect replacement to fill the empty position. Ruto then said that he has already proposed someone that he wants to be considered for the position. He however asked the NPS to appoint another person to take over Kinoti's position in the meantime.

"I have also received the resignation of the director general of CID Mr Kinoti and I have transmitted the same to the National Police Service to proceed with advertising that position. Meanwhile they should get somebody to act in the place of Kinoti. Some consultations were going on and I wanted to confirm whether the gentleman I want to propose for parliament to consider as the Inspector General concluded." Ruto said.

For sometime now Kinoti has been complaining about being undermined by Ruto's administration. Immediately after being sworn in Ruto ordered the DCI to work from their headquarters as he believes they were used by the deep state to oppress him during the elections. This could have angered the DCI boss who chose to resign. Watch the video in the link shared below. Subscribe for more news updates daily.

RIP: Mother Inconsolable After Her 3 Sons Were Lynched by Mob