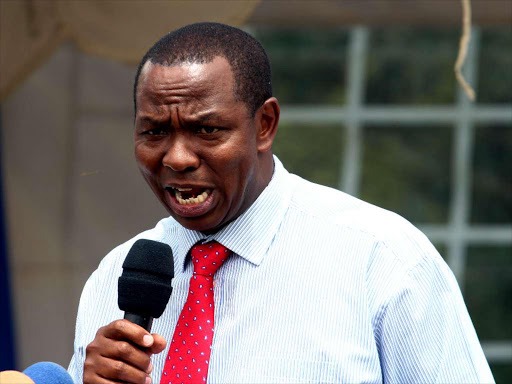 Laikipia County Governor Hon Nderitu Mureithi, who is also serving as the Orange Democratic Movement (ODM) party leader Raila Odinga's presidential campaign team chairman, has hit out at the Deputy President Dr William Ruto claiming that the second in command has grabbed a half of the NDC land in Laikipia which was meant to be public ranches, where farmers could feeding their livestock and now they have been left suffering especially during the drought seasons.

Speaking during the Azimio la Umoja Movement rally in Narok today, Mureithi argued that farmers in Laikipia, Isiolo and Samburu counties are usually the most affected ones during the drought seasons, because Deputy President Dr William Ruto has grabbed a half of the public land in the region popularly known as the NDC land.

"In our country in Laikipia, we also have farmers who are also livestock keepers and there was public lands called NDC farms. A half of that land has also been grabbed by that man whom you have been told about here (DP Ruto). Our farmers are suffering right now especially during the drought season they usually don't have a place to graze their livestock." He said in Swahili language.

Ann Waiguru Campaign Materials Destroyed, She Faults Her Major Competitor In The Race

Top challenges Kenyans are facing as revealed in this current survey