The four OKA chiefs in a past function.

The 2022 general elections will be unique in that the vote rich mount kenya region will not be having a formidable candidate unlike in 2013 when Kibaki left office paving way for Uhuru.

In a move to remain relevant, the region's big shots are shopping for a candidate from outside the region who will safeguard their interests.

The initiative is spearheaded by a powerful clique of rich tycoons under the auspices of mount kenya foundation which has president Uhuru's blessings.

The foundation is chaired by equity bank founder Peter Munga. Other members include president Uhuru Kenyatta's maternal uncle George Muhoho, Eddy Njoroge who is the former kengen chief among others.

The foundation will be meeting OKA Leaders today at safari park hotel Nairobi with the meeting having been postponed from Friday last week to Thursday.

The meeting will be happening ten days after another one Which they held with ODM leader Raila Odinga at the same venue.

While confirming attendence last week, ANC party leader Musalia Mudavadi said that he would be attending the meeting to try to convince them to support his bid for presidency.

The MKF's Director of communications Joe murimi confirned yesterday that the meeting will go on as scheduled noting that the response was positive.

"The forum will take place tomorrow, we have planned well and we are ready to host OKA principals", said murimi as quoted by people daily.

However, even as they meet the four principals, the foundation is said to be keen on convincing the them to support Raila.

According to people daily, the chairman Peter Munga had indicated that they would invite the ODM Chief to the meeting.

As the foundation goes on with the meetings, the Tycoons aren't keen on talking to the deputy president William Ruto who has difered with president Uhuru Kenyatta over running of government. 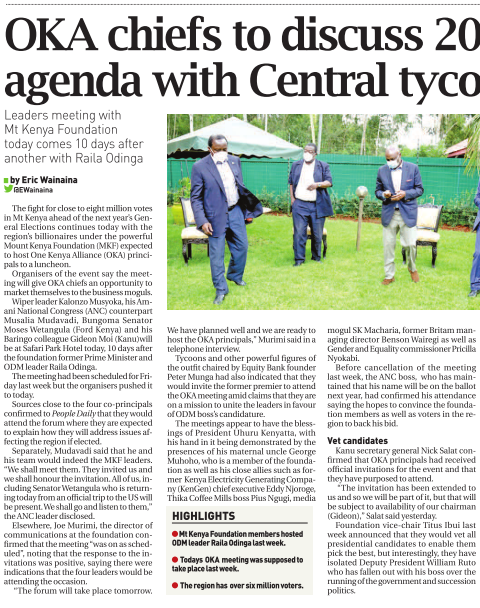