By Dominickirwa (self media writer) | 14 days ago

As 2022 election peeps in the presidential position is becoming a puzzle to Kenyans as they are stranded in a dilemma on who to succeed the current sitting president his Excellency President Uhuru Kenyatta. 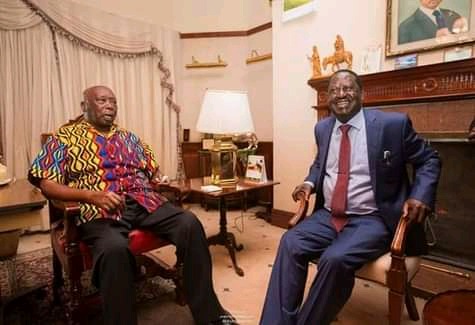 a photo of the late President Daniel Moi and Raila Odinga

The same scenario happened in 2002 when the late his Excellency Daniel Toroitich arap Moi was going to retire the puzzle on who to succeed him had already pave way during that time moi endorsed Jomo Kenyatta's son Uhuru Kenyatta and this became much biased by people due to his harsh ruling.

Actually many had questioned Moi's decision to endorse Uhuru Kenyatta when there were many experience individual who had served in his government this individual includes:Kalonzo Musyoka,Musalia Mudavadi,the late George Saitoti,Raila Odinga and Several Others.

His endorsement led to speculations by political analysts who actually who had to send elders for the president to precisely explain the reason behind his endorsement and Moi was Open to them.

The reason why Moi did not endorse Mudavadi is that Mudavadi is a coward and the nation can be led by corwad,then he was asked about Kalonzo too now that he was his vice president.

Moi did not hide it he openly said Kalonzo cannot make stable decision then he was asked about Saitoti and he said Satoti varies with his opinion.

Then Moi was asked about Raila Odinga and Moi state it clearly that Raila Odinga cannot be a leader because when he achieves his interest he forgets that he was with others and that is why Moi Chose Uhuru Kenyatta.

Remember it is Moi again who told president Uhuru Kenyatta to unite with William Ruto to achieve his dream of leading this country.

But the question is why did Moi in 2018 had to be visited by Raila Odinga and Uhuru Kenyatta while Ruto was denied?

This is a secret that hungs between the Moi's,Odinga's and Kenyatta's family and the man who knows this secret is William Samoei Ruto and that is why he is being fought.

It is not a campaign but it is something you need to internalise before 2022.

Content created and supplied by: Dominickirwa (via Opera News )